Ocasio-Cortez, in Leaked CNN Interview, Says She Feared Being Raped During Capitol Riot 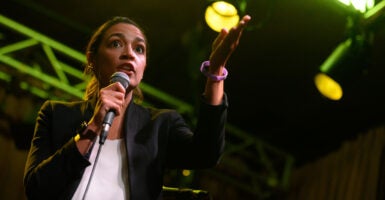 "I didn’t think that I was just going to be killed. I thought other things were going to happen to me as well," Rep. Alexandria Ocasio-Cortez, D-N.Y., tells CNN's Dana Bash in the leaked video. Pictured: Ocasio-Cortez speaks at a rally in Cleveland July 24, 2021. (Photo: Jeff Swensen/ Stringer/Getty Images)

Portions of a leaked CNN interview published by an independent investigative media outlet show Rep. Alexandria Ocasio-Cortez, D-N.Y., saying she thought she was going to be raped during the Jan. 6 riot at the Capitol.

In the video clip published by Project Veritas, Ocasio-Cortez tells CNN’s Dana Bash that she is a survivor of sexual assault, noting that she has not “told many people that.” Project Veritas’ source believed CNN would air the interview in August, spokesman Mario Balaban told The Daily Caller News Foundation.

The New York Democrat announced in February to her 9 million Instagram followers that she is a survivor of sexual assault, arguing that those who say it is time to move on from the Capitol riot are “using the same tactics of every other abuser who just tells you to move on.”

“For a lot of [sexual assault] survivors across the country, the decision to come forward oftentimes does not feel like a conscious one,” Ocasio-Cortez tells Bash in the video published Tuesday by Project Veritas, adding:

That impact was doubled that day because of the misogyny and the racism that was so deeply rooted and animated—that attack on the Capitol, you know, white supremacy and patriarchy are very linked in a lot of ways. There’s a lot of sexualizing of that violence. … And I didn’t think that I was just going to be killed. I thought other things were going to happen to me as well.

The New York Democrat’s office did not respond to requests for comment from The Daily Caller News Foundation.

A CNN source said the leaked clips are not from an unaired documentary but rather from a piece still being edited to be shown on the cable outlet. The source characterized the video surfaced by Project Veritas as an “annoyance but a nonscandal.”

“This is journalism,” Balaban said when pressed about why Project Veritas would publish a leaked CNN interview. “When people leak information the public deserves to know, Project Veritas will publish it.”

The bigger question, Balaban said, is why someone at CNN felt compelled to leak the footage early.

“Clearly they thought it looked like a puff piece,” he said. “CNN was clearly framing [it] a certain way. Someone obviously felt compelled to let Project Veritas break the story so the public could know what the story really is.”

Project Veritas founder James O’Keefe said in a video message that YouTube had removed the leaked CNN video Tuesday, saying it “contains content from Turner CNN, who has blocked it on copyright grounds.”

“This is just another example of collusion between big media and Big Tech,” O’Keefe said, adding:

They would never do this if CNN was publishing stuff from within Project Veritas. There would be no copyright issues. We are publishing things we think the public has a right to know, about a member of Congress talking to Dana Bash. We made it our own, we didn’t publish the whole thing, we only published minutes of it, we have a duty to do that.

Project Veritas currently is suing CNN for defamation, alleging that one of the cable outlet’s news anchors, Ana Cabrera, defamed Project Veritas in February by suggesting that its Twitter account was suspended for “promoting misinformation.”