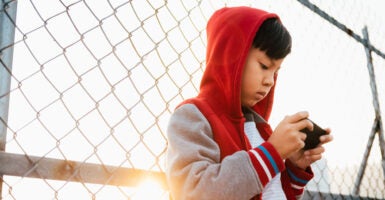 This may qualify for the worst Tweet of the year. pic.twitter.com/uzf1NkKfPC

“Absolutely not getting swept up into another twitter cesspool so deleted tweet before it picks up steam! Obviously not an actual solution, but it is a real problem. Everyone take a deep breath,” she tweeted.

Gill then tweeted: “Apropos of nothing I really think if someone quickly deletes a tweet, it shouldn’t be screenshotted and shared like… just let it die, you know? no? no one else agree?”

Some tweets should be preserved and brought to the attention of as many people as possible.

“I propose we seize the laptops of all journalists until we figure out what is going on,” joked commentator Lauren Chen.

“The journalists are at it again,” tweeted Human Events senior editor Jack Posobiec.

A millstone would be much too merciful. pic.twitter.com/q9ilaBcUor

Gill’s comments follow calls for children to be exposed to kink performances at Pride events throughout the month of June, such as a Washington Post op-ed published in late June that encouraged exposing children to “kink culture.”

“Yes, kink belongs at Pride,” read the headline of writer Lauren Rowello’s Washington Post piece. “And I want my kids to see it.”

Joseph Fischel, an associate professor of women’s, gender, and sexuality studies at Yale University, wrote in a Boston Globe op-ed that “leather chaps and nipple clamps and boys kissing boys and girls kissing girls” provide models of “living and loving that many kids and teenagers attending Pride have never seen” or have only seen online in pornography.

“When parents or people ventriloquizing parents oppose public indecency at Pride on the grounds that it may upset children, the opposite is more likely the case: their children might like it, and that upsets the parents, not the children,” Fischel wrote.