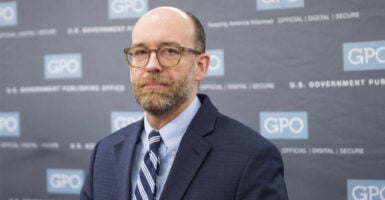 A top Trump administration official filed a Freedom of Information Act request Wednesday to obtain communications between the Department of Education and a critical race theory activist group whose materials were promoted in a U.S. government guidance book, Fox News reported.

Russ Vought, president of the Center for Renewing America and chief of the Office of Management and Budget under President Donald Trump, filed the FOIA to find out more information on the communications of the Abolitionist Teaching Network and its link to President Joe Biden’s Education Department, Fox News reported. Vought took a tough stance against critical race theory as OMB director by banning any related funding and “white privilege” training.

The Biden administration previously called it an “error” to promote the activist group’s guide in an Education Department handbook, which was meant for use in over 13,000 public school districts to instruct them on reopening recommendations and policies amid the COVID-19 pandemic.

Critical race theory holds that America is fundamentally racist, yet teaches people to view every social interaction and person in terms of race. Its adherents pursue “anti-racism” through the end of merit, objective truth, and adoption of race-based policies.

“The American people deserve to know who at the highest levels in the White House pushed this radical, racist group into reopening guidelines for our schools,” Vought told Fox News in a formal statement.

The Abolitionist Teaching Network’s guide said “Abolitionist Teachers” should “[b]uild a school culture that engages in healing and advocacy. This requires a commitment to learning from students, families, and educators who disrupt Whiteness and other forms of oppression.”

The guide also discusses the “spirit murder” of people of color and the group’s co-founder and board chair, Bettina Love, previously has said, “I want us to be feared,” Fox News reported.

“It’s extremely troubling that Biden’s Department of Education promotes a group that accuses children of ‘spirit murdering’ other children based on their skin color,” Vought said. “This administration has made an Olympic sport out of state-sanctioned racism, and it’s about time the curtain gets pulled back.”