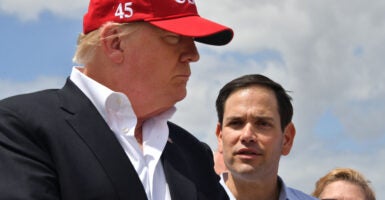 “We were already looking at how to provide internet access,” Rubio, R-Fla., told The Floridian, a news website, in an interview published with video Thursday. “We had made great progress in that regard. It was going to happen in his second term, and obviously, this all stops when [the Biden administration gets] in.”

Rubio said that liberty in Cuba was “a priority” for the Trump administration. He faulted the Biden administration for what he considers a weak response.

“When you elected a president who has a substantial percentage of his base are devout Marxists and socialists, you’re not going to get the same response,” the Florida Republican said.

Rubio said he believed a second term for the Trump administration would have rallied the international community behind the Cuban people against the communist regime in Havana.

Earlier this month, Trump criticized President Joe Biden’s response to the Cuban uprising, but did not directly mention plans by his administration to get internet into the country.

“The Biden administration’s refusal to forcefully condemn communism and the Cuban Communist Regime is a national travesty,” Trump said. “The Biden administration’s ludicrous suggestion that the Cubans are protesting government mismanagement—not brutal Communist oppression—is an insult to every Cuban patriot who has suffered, been imprisoned, or died in pursuit of freedom.”

Though Biden administration officials initially attributed the mass protests against the communist regime to its management problems, Biden said at a July 15 press conference: “Communism is a failed system, a universally failed system, and I don’t see socialism as a very useful substitute.”