What You Need to Know About Boondoggles in Senate Infrastructure Bill 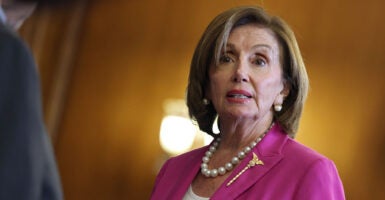 House Speaker Nancy Pelosi is pushing to extend a subway from San Francisco, not far from her congressional district, to Silicon Valley, with funding in the Senate’s $1.2 trillion infrastructure bill. (Photo: Anna Moneymaker/Getty Images)

House Speaker Nancy Pelosi is pushing to extend a subway from San Francisco, not far from her congressional district, to Silicon Valley, with funding in the Senate’s $1.2 trillion infrastructure bill.

Adam Andrzejewski, founder and CEO of OpenTheBooks.com, and Sen. Joni Ernst, R-Iowa, are calling this Pelosi’s Bay Area Boondoggle. Why? Andrzejewski joins a bonus episode of “The Daily Signal Podcast” to discuss.

Listen to the podcast or read the lightly edited transcript below.

Adam Andrzejewski: Thank you, Rachel. Thank you very much for your interest in our work. It’s great to be here.

Del Guidice: I want to start off talking just big picture about the Senate infrastructure bill. It’s $1.2 trillion, and we’re going to talk a little bit more about the pet projects in it, specifically of [House Speaker] Nancy Pelosi. But just overall big picture: Right now, this legislation is in gridlock because people on both sides of the aisle, Democrats and Republicans, aren’t happy with how this is shaping up. What are your general thoughts on this package?

Andrzejewski: So, three points right off the top. One, it’s going to be interesting to see what the ratio and percentage is toward hard infrastructure versus what the Democrats view as infrastructure. That’s point No. 1.

At OpenTheBooks.com, we’ve had a petition since January on this very issue to urge Congress to simply read the bill, [to have] a 72-hour timeout after the legislation’s dropped. So the people, the opponents, the politicians, the press—so we all have time to hold Congress accountable for what’s in the bill. I am proud to say that Florida Sen. Rick Scott has turned this into legislation that would take it a step further and also require an affidavit from every single member of Congress that they actually did read the bill. So this is good policy.

Point No. 3 on infrastructure is we need to watch how much money is dedicated toward broadband. Sounds good to bring broadband internet to underserved areas; however, this administration wants to actually own the access points. They want to own the pipe. It’s not enough in their minds that Big Tech is censoring everybody on the center-right. They actually want to own the access point, and that is simply Soviet.

Del Guidice: As you mentioned before, and we’re going to go right to your conversation and press conference with Sen. Ernst, but you had mentioned how Democrats want to pass this legislation without even reading it. And I think it was very recently, probably last week, the Democrats were like, “Well, let’s just pass it and then we’ll write it after we pass it.” And immediately when I saw that, I just thought of the whole Obamacare situation where that happened. And that’s still being litigated today. So it’s interesting that this keeps happening, and I’m glad you brought that up.

Andrzejewski: Do we really have a representative republic if our representatives don’t even know what they’re voting on? That’s why urging Congress to read the bill at openthebooks.com/readthebill I think is so important. And already, tens of thousands of regular people across the country have signed our petition.

Del Guidice: All right, we’re going to talk about your press conference with Sen. Ernst, but for people who don’t know what Open the Books is, can you tell them?

Andrzejewski: At OpenTheBooks.com, we are the only ones in the big government data-collection space. Let me tell you what I mean by that. We filed 40,000 Freedom of Information Act requests just last year. It was the most in American history. We successfully captured $6 trillion of state, federal, and local spending across the country, about 90 cents on every dollar taxed and spent at every level in the country is on our database. So people can follow the money and hold the political class accountable for tax-and-spend decisions. Our mission is simply summarized as “Every dime online in real time, Open the Books.”

Del Guidice: We’re going to talk about your press conference. You were speaking with Sen. Joni Ernst—she’s a Republican from Iowa—on putting the brakes on Speaker Pelosi’s subway boondoggle that you all are calling it. Can you tell us what’s happening right here with this boondoggle that you have highlighted in this infrastructure bill?

Andrzejewski: So, this subway system outside San Francisco that would link San Jose to Silicon Valley is 6 miles long. And Democrats want to spend now nearly $7 billion to take a subway system 6 miles.

The underlying subway systems and train systems are in deep financial problems. They have no reserves, they’ve burned through their reserves, they are projected to lose billions of dollars over the next 10 years. And the Democrats want to add to the fiscal pain for taxpayers on a system that nobody even wants to ride.

Del Guidice: You were speaking with Sen. Ernst. What did she say? I’m curious about why she wants this infrastructure boondoggle that’s in this package to be removed.

Andrzejewski: So, Sen. Ernst has led the way. Many people listening to the podcast will remember the good Democratic U.S. senator from Wisconsin, William Proxmire. And William Proxmire in the 1970s and ’80s gave out the Golden Fleece Award, which at the time was the most effective public policy rhetoric device that existed.

And I believe Sen. Ernst’s Squeal Award on waste, fraud, corruption, and abuse that she gives out on a monthly basis is following in that legacy and is the most robust waste award, political public policy tool that exists today. So we’re happy to stand with her and showcase the subway system in Nancy Pelosi’s district.

Del Guidice: This might be a little bit of conjecture on my part [but] I’m curious to know what you think. You mentioned that most people don’t want this implemented … why is Pelosi pushing for this, if people don’t want it?

Andrzejewski: It’s very interesting, but I mean, when you have a massive $7 billion infrastructure subway build, that’s a tremendous amount of government money that can be brought to bear to pay off everybody. All the contractors, the unions, all the different constituencies, using other people’s money. And I think that’s the political impetus. It’s all about power and being able to dole out the contracts to the tune of billions of dollars. That’s what’s at stake here with our money.

Here’s another reason, Rachel, why it’s important for all of us to raise our voice on this. When George W. Bush began his presidency, the national debt was at $5.8 trillion. When Barack Obama ended his presidency, it was at little over $19 trillion. After four years of Donald Trump and a national pandemic, we’re at $28 trillion of national debt.

If we’re going to add public infrastructure projects, they must be financially sound, there must be a demonstrated need, and they must be sustainable on a go-forward basis with a minimum or none of taxpayer subsidy. This Pelosi boondoggle has been called out by Sen. Ernst, rightly so, for failing on all three of those points.

Del Guidice: On that note, Adam, how does this affect American taxpayers when we have debt that keeps going up to the tune of what you just mentioned?

Andrzejewski: When you have a national debt, what happens in the short run because of the interest payments [is] spurring inflation; when you have too much government money out there chasing too little goods, you get inflation. And what inflation does [in] the short term for regular people is three things. No. 1, anything you want to purchase, you’re going to have to pay more for. No. 2, your assets that you currently hold, in the short run, they’re worthless. And No. 3, [regarding] your income, you’re going to have to work harder to stay current because everything that you want to purchase costs more.

Del Guidice: Is there anything else in this legislation that you want to highlight as wasteful, or just tell people, “Hey, look out for this. This is another item that’s in this infrastructure package that you should know about”?

Andrzejewski: Yes. I’m glad you brought this up. Look, we’re all under the impression that Republicans have our back on fiscal issues and in this infrastructure bill, it’s just not true. We identified at OpenTheBooks.com 23 newly elected Republican freshmen that adopted [budget] earmarks. They tipped the Republican caucus in the House into Nancy Pelosi’s earmark parade. She wanted to bring back earmarks, Republicans took a secret vote, and now we know the swing vote in that caucus was the 23 newly elected Republican members of Congress.

Pelosi then turned around in the House version of infrastructure legislation and rewarded those 23 Republicans with nearly $400 million worth of earmarks. So we need to be very conscious here about Republicans going south, not holding the line on the bill, because their vote’s been “purchased” because they have a pet project from Pelosi in the bill.

Del Guidice: You bring up earmarks and this is essentially an earmark that we’re talking about with Speaker Pelosi, so let’s talk about that for just a moment. Why are earmarks bad, or why are you against them?

Andrzejewski: It’s the currency of corruption in Congress. So, our former honorary chairman is the legendary U.S. senator from Oklahoma, Dr. Tom Coburn, and he passed about a year ago. This was one of Coburn’s signature issues. And he partnered with then-President Barack Obama, his friend, to get the earmarks banned. And it was in place for 10 years. Pelosi wanted to bring it back because it helps codify her power as speaker.

Furthermore, [President] Joe Biden has a $6 trillion spending agenda and they want to make the votes on that legislation bipartisan. And they plan to do it by buying off Republican votes. Legalized bribery will give you a pet project in your district for your vote on the bill, and that’s why earmarks are so pernicious.

Del Guidice: Well, Adam, thank you for joining us on a bonus episode of “The Daily Signal Podcast” and breaking this all down for us. We appreciate having you.