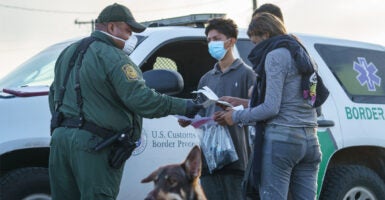 The Texas National Guard will be deployed to assist law enforcement officials in arresting illegal migrants on state criminal charges at the southern border, Gov. Greg Abbott, a Republican, announced.

Illegal migrants who are apprehended and found to have committed state offenses such as criminal trespassing, human trafficking, and narcotics smuggling are subject to arrest and detention, Abbott said Tuesday.

“By virtue of the power and authority vested in me by the Constitution and laws of the state of Texas, I hereby order that the Texas National Guard assist [the Department of Public Safety] in enforcing Texas law by arresting lawbreakers at the border,” Abbott said in a letter to Texas National Guard Maj. Gen. Tracy Norris.

The Republican governor said he directed Texas law enforcement officials to enforce all federal and state criminal laws against illegal immigrants entering the U.S. through the state.

“To respond to this disaster and secure the rule of law at our southern border, more manpower is needed—in addition to the troopers from DPS and soldiers from the Texas National Guard I have already deployed there—and DPS needs help in arresting those who are violating state law,” Abbott said in the letter.