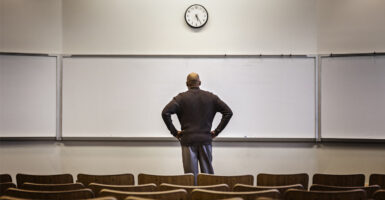 At the start of my freshman year, I knew that I would be hearing the same overused leftist sentiments. However, I genuinely did not expect them in every class, including general education courses. (Photo: Hill Street Studios/Getty Images)

Alexandra Bedner is a member of the Young Leaders Program with a focus on marketing at The Heritage Foundation.

When I was looking at colleges during my senior year of high school, I knew that I wanted to attend an institution that focused on education rather than indoctrination. My impression was that my professor’s role was facilitating students’ ability to think critically, not indoctrinating them to a point where they thoughtlessly repeat their teachers’ views on any given issue or topic.

In choosing to study political science, I suspected that I might be subjected to a subtle tyranny of leftist views in the classroom. If you asked my grandmother, she was flat-out worried I might return from college a leftist.

At the start of my freshman year, I knew that I would be hearing the same overused leftist sentiments like, “my body, my choice,” again and again in my politically-focused classes. However, I genuinely did not expect statements like these to pop up in every class, including general education courses.

Nor did I expect to hear these sentiments more from the professors than the students. As an aside for the reader: I will be using the word “freshman” throughout this article, despite my college’s many warnings that the term is discriminatory.

The first time I remember something like this happening was during my freshman general education history class. My professor compared President Donald Trump to Adolf Hitler, during a conversation about neither Trump nor Hitler. Similarly, my sophomore year film professor made defamatory remarks about fellow American citizens whom he described as “crazy conservatives, who were always hicks from the country.”

A glaring example occurred during my junior year, when my biology professor spent a large portion of the lecture discussing climate change and praising the Green New Deal.

Maybe I just didn’t understand how education in college was supposed to work, as shock and dismay overcame me each time a professor inserted his or her personal policy preferences or ad hominem attacks into an otherwise apolitical subject matter.

One of the most flagrant examples occurred during a senior year statistics class. Who would have thought that something as cold and objective as statistics could be used as a platform to voice personal political opinions and push a leftist agenda?

Clearly aware of the backlash he could face from these assertions, he once remarked, “and I know I have conservatives in this class, but I don’t really care.”

As mentioned earlier, I knew when I chose to study political science, those professors might have strong opinions on political issues and undoubtedly voice them. What I did not realize was that all professors, no matter what the subject, were working to push a certain ideological agenda—the left’s agenda—onto all the young and malleable minds with which tuition-paying parents had entrusted them.

For a while, these remarks made me feel as though I was not wanted, nor did I belong in these classrooms that I was paying a great deal of money to sit in.

I entered these rooms expecting to expand my knowledge and left feeling as though I was less of a person because of the political beliefs that I held. I eventually learned to laugh at the comments, for they were being made by people who fully believe that abortion is not murder and that citizens should not have the right to bear arms.

While I wish I could say that I spoke up and offered counterarguments to these professors’ points during class, I did not. I sat there silent, for fear that if I did, I would receive poor grades on future assignments in retaliation for my ideological rebellion.

Many of today’s college students face the same choice I did: express their deeply held personal beliefs and morals or achieve academic success. This should trouble every American who believes in the principles this country was founded upon like freedom of speech and conscience.

At the end of the day, I am sure many of my professors hoped that their words could sway me to the left. Unfortunately for them, that was not the case. Implying that the terms “conservative” and “hick” were synonymous did not convince me to toss my MAGA hat in the trash. Calling me a racist for not supporting the BLM movement did not cause me to have any critical theory epiphanies.

For me, these remarks made no difference, but for others I’m not so sure. I fear many others my age cave to these attempts at brainwashing.

I’ll close by addressing some of my former professors who might be reading this: To my statistics professor, I was the conservative in your class that you did not care about. To my history professor, you were supposed to be teaching me about the facts of history as they happened, not as leftists imagined them.

Finally, to my university, consider hiring professors who stick to teaching the subject areas in which they are qualified, not their opinions.

However, and finally to my grandmother, you will be happy to know that I made it through college and did not become a liberal.