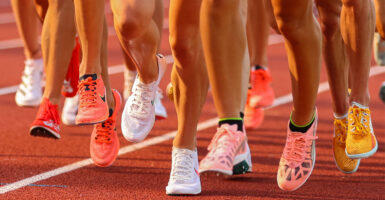 "I have been provided with scant evidence that this law addresses any problem at all, let alone an important problem," U.S. Circuit Judge Joseph R. Goodwin says. Pictured: A scene from the Women's 1500 Meters Final on June 21 at the U.S. Olympic Track & Field Team Trials in Eugene, Oregon. (Photo: Patrick Smith/Getty Images)

A middle school student who is a biological male may run on a girls cross country team this fall in spite of West Virginia’s new law banning biological males from women’s sports, a federal judge has ruled.

Lawyers from the ACLU-West Virginia had argued to U.S. Circuit Judge Joseph R. Goodwin that HB 3293 would unfairly prevent the 11-year-old student, Becky Pepper-Jackson, from participating on the girls cross country team.

Goodwin issued a preliminary injunction Wednesday allowing Pepper-Jackson to “sign up for and participate in school athletics in the same way as her girl classmates.”

“A fear of the unknown and discomfort with the unfamiliar have motivated many of the most malignant harms committed by our country’s governments on their own citizens,” Goodwin said, adding:

Out of fear of those less like them, the powerful have made laws that restricted who could attend what schools, who could work certain jobs, who could marry whom, and even how people can practice their religions.

At this point, I have been provided with scant evidence that this law addresses any problem at all, let alone an important problem. When the government distinguishes between different groups of people, those distinctions must be supported by compelling reasons.

Pepper-Jackson began identifying as a girl at a young age and would dress as a girl at home but a boy at school, according to the court filing. The child reportedly was diagnosed with gender dysphoria in 2019, began puberty-delaying treatment in June 2020, and now is entering sixth grade.

“Plaintiff avers that this treatment, which prevents endogenous puberty and therefore any physiological changes caused by increased testosterone circulation, prevents her from developing any physiological advantage over other girl athletes,” according to the filing.

West Virginia’s law not only would require students to participate in sports that align with their biological sex, but also mandate students to provide birth certificates to the school to indicate their gender.

The state joins several others drawing up legislation to ban biological males from girls and women’s sports. Arkansas Gov. Asa Hutchinson, a Republican, signed his state’s Fairness in Women’s Sports Act into law in late March, but later drew fire for vetoing a bill banning transgender surgeries and procedures for minors.

The Arkansas Legislature overrode the governor’s veto, making Arkansas the first state to ban the procedures for minors. A federal judge temporarily blocked enforcement of the law Wednesday, however.

South Dakota’s Fairness in Women’s Sports Act was thrust into the national spotlight when Gov. Kristi Noem refused to sign the legislation without her suggested changes.

Noem said the bill would subject South Dakota to lawsuits the state could not win, and that she seeks to “protect girls” through other measures. Those include two executive orders, one to “protect fairness in K-12 athletics” and another to “do so in college athletics.”

Noem has insisted that she did not cave to pressure from groups such as the NCAA, which later warned publicly that it would pull out of states that don’t allow transgender students to participate in college sports.