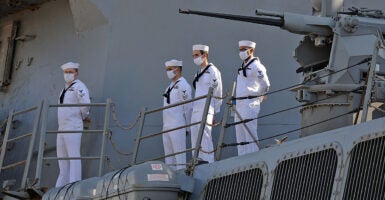 Increased administrative burdens and training not related to combat have eaten into the time that America's sailors should be using to hone mission-critical skills, a report says. Pictured: Sailors look on as they stand aboard the U.S. Navy guided-missile destroyer USS Winston S. Churchill while it anchors in Port Sudan on March 1, 2021. (Photo: AFP/Getty Images)

A new congressional report on the U.S. Navy “found that a staggering 94% of sailors interviewed believe that the surface Navy suffers from a crisis of leadership and culture.”

Increased administrative burdens (750 annual reports per ship, most of them useless) and training not related to combat have eaten into the time American sailors are able to devote to honing mission-critical skills.

Sen. Tom Cotton, R-Ark., one of the legislators who commissioned the report, said the results were “disappointing because it confirmed what I suspected.” He moved to commission a report after a string of incidents have destroyed U.S. Navy ships even under peacetime conditions.

The USS Fitzgerald and USS McCain ran into other ships, the USS Bonhomme Richard caught fire in a U.S. port, and American officers in the Persian Gulf surrendered their patrol crafts to what were little more than Iranian fishing boats.

The Navy has “lost a capital ship worth hundreds of millions, if not billions, of dollars on average every six months over the last several years,” said Cotton. “Those are not isolated incidents.”

According to the report, many sailors agree. “Sometimes I think we care more about whether we have enough diversity officers than if we’ll survive a fight with the Chinese navy,” said one active-duty lieutenant. “They think my only value is as a black woman. But you cut our ship open with a missile and we’ll all bleed the same color.”

Cotton said the “failures go back over multiple administrations,” but “it’s gotten worse with things like critical race theory.” Like the report, which was directed by two retired flag officers, the Navy’s problem transcends partisan politics.

The surface Navy—that is, ships on the water—is what would fight a major war. “We need a warfighting culture in our surface Navy,” Cotton said. Due to America’s long coastlines and few neighbors, a strong Navy has been our most critical security component since the founding era.

Cotton said, “A conflict with China would probably start and primarily remain a naval and aerial battle” because they lie across the vast Pacific Ocean. Yet “the surface Navy has lost its warfighting edge,” he lamented.

The bulk of a sailor’s training should be on “basic seafaring skills,” said Cotton, which is clearly lacking when our naval vessels are running into other ships. Even human trafficking training, which can be good, said Cotton, can be a distraction if it turns into half a day or more of training.

During the 1980s, marines and naval personnel practiced memorizing the Russian navy and army so that they could identify ships and tanks by their silhouette and know exactly what weapons their opponents had and how much time they had to get out of the way. Today, it’s safe to say America’s sailors spend too much time filling out paperwork and reading Ibram X. Kendi to do anything of the sort.

Cotton said Congress can take some action to solve the Navy’s unreadiness. For instance, careful oversight of naval maintenance schedules can help to reduce time spent on repairs, which is time sailors aren’t practicing maneuvers. But many of the Navy’s problems come down to leadership, said Cotton, especially after the Obama administration pushed out military leaders who refused to participate in social experimentation.

Originally published in Tony Perkins’ “Washington Update,” which is written with the aid of Family Research Council senior writers. The photo accompanying this commentary was changed Aug. 3 to better reflect its subject.