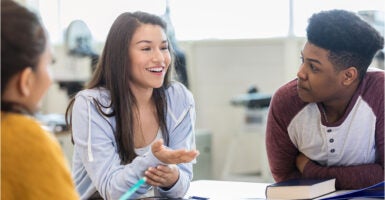 The Leadership Institute trains students to be a voice for freedom on their college campuses. (Photo illustration: SDI Productions/Getty Images)

Student activism “has to be loud,” Kristin Dobson, national field director for the Leadership Institute, says.

Dobson trains young people across America how to have a voice on their college campus. Through practical tools, she and her team show young people how to promote freedom and conservative principles effectively at their universities.

Dobson joins the “Problematic Women” podcast to tell how the Leadership Institute is creating positive change on college campuses. And as a long-time Taylor Swift fan, Dobson breaks down why she thinks the pop star is such a success.

Also on today’s show, we talk with Sophia Fisher, founder of Stop the Demand Project, which fights human trafficking. Fisher founded the nonprofit this year after becoming concerned with the ways technology is used to promote this particular crime.

Fisher’s organization looks specifically at factors such as pornography, drugs, and alcohol that further human trafficking. It seeks to address those issues, she says, because “ultimately, if we can reduce the demand, there will be less supply.”

Fisher explains how the Stop the Demand Project plans to use technology to protect Generation Z from human traffickers.