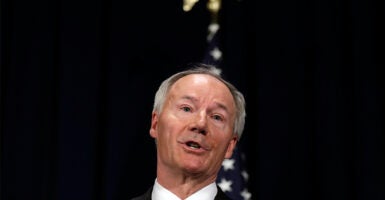 A federal judge on Wednesday temporarily blocked the enforcement of a highly publicized Arkansas law banning sex-change procedures for minors.

Arkansas’ Save Adolescents From Experimentation Act, otherwise known as the SAFE Act, prohibits physicians from performing sex-change procedures, such as using puberty blockers or doing “top” and “bottom” surgeries, on minors.

U.S. District Judge Jay Moody blocked the SAFE Act, saying the measure would cause “irreparable harm” to minors, The Associated Press reported. The law was set to go into effect July 28.

“Our legislature made the reasonable decision to protect minors from dangerous and life-altering drugs, hormones, and surgeries,” Cotton said. “Against the will of Arkansans, liberal activists have now put those children back in harm’s way.”

The American Civil Liberties Union filed a lawsuit against the SAFE Act in May, arguing that the law would violate the constitutional rights of transgender minors.

ACLU of Arkansas Executive Director Holly Dickson praised the judge’s ruling Wednesday, saying it “sends a clear message to states across the country that gender affirming care is life-saving care, and we won’t let politicians in Arkansas—or anywhere else—take it away,” AP reported.

Tony Perkins, president of the Family Research Council, said his organization is “disappointed but not surprised” at the temporary hold and called sex-change procedures for minors “unscientific, experimental, and destructive.”

“The legal challenge to this law is being mounted by a political movement that advocates for using off-label drugs and experimental procedures on minors,” Perkins said. “Yet a growing number of individuals are coming forward to share their stories of being permanently disfigured and/or sterilized from procedures such as puberty-blocking drugs, cross-sex hormones, and irreversible surgeries. The truth about the dangers of these life-altering procedures cannot be ignored.”

Arkansas Gov. Asa Hutchinson, a Republican, drew fire from conservatives when he vetoed the legislation earlier this year, describing it as a “vast government overreach” and adding that the state shouldn’t jump into every “medical, human, and ethical issue.”

The state Legislature overrode his veto in April, making Arkansas the first state to ban the procedures for minors. Hutchinson’s veto was met with swift criticism from conservatives, including Daily Wire’s Matt Walsh, who called the governor a “useless coward” and “worthless wimp.”