During Captive Nations Week, Heed Warnings of These 3 Victims of Communism 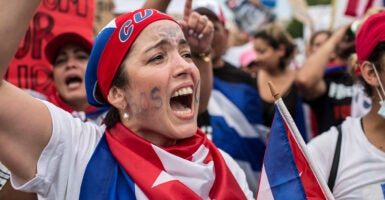 Since 1959, America has recognized the third week of July as Captive Nations Week, taking time to recognize and advocate for those suffering under communist regimes. Pictured: Demonstrators show solidarity with the Cuban people at a rally outside the White House on July 17. (Photo: Probal Rashid/ LightRocket /Getty Images)

Survivors of communism, pro-democracy activists, and political leaders gathered in Washington on Tuesday to commemorate the annual Captive Nations Week.

The four-hour summit, hosted by the Victims of Communism Memorial Foundation, featured firsthand testimonies about, and expert analysis of, communist regimes across the globe, but it also served as a warning about the need to protect freedom at all costs.

“As we observe Captive Nations Week, let us remember what President Ronald Reagan, my former boss, said in 1983,” former Ambassador Paula Dobriansky said in her remarks. “He said, ‘Free people, if they are to remain free, must defend the liberty of others.’ Today, we come together to advance that noble goal.”

I invite the people of the United States of America to observe such week with appropriate ceremonies and activities, and I urge them to study the plight of the Soviet-dominated nations and to recommit themselves to the support of the just aspirations of the peoples of those captive nations.

More than 60 years later, the tradition of a presidential proclamation of Captive Nations Week continues.

“Though much has changed in the world since President Eisenhower issued the first Captive Nations Proclamation in 1959, its call for liberty and opportunity still ring true,” President Joe Biden said in his July 16 proclamation.

Speakers at Tuesday’s summit spoke about the human rights abuses and failures of many communist nations, calling on the American people to take action in defense of liberty for those living under totalitarian regimes.

Here are some of the stories and expert analyses from those who have experienced communism firsthand and are fighting for democracy in their homelands:

David Smolansky, a former Venezuelan political leader, and his family have an intimate knowledge of communism.

In the 1920s, Smolansky’s grandparents fled the Soviet Union and found a new life for themselves in Cuba. Smolansky’s father was born in Cuba, but left the country with his family in the 1970s to escape the hardships they faced under Fidel Castro’s regime. The family settled in Venezuela, where Smolansky, 36, was born.

In 2014, Smolansky was elected mayor of the El Hatillo municipality in Caracas, Venezuela. As mayor, he successfully fought to reduce kidnappings there, enabling it to become one of the safest and most transparent in the nation.

But in 2017, Smolansky said, he was forced to flee Venezuela after he was removed from office by President Nicolas Maduro’s administration, and a warrant was issued for his arrest. He escaped to Brazil after 35 days in hiding and ultimately emigrated to America. He currently serves as a visiting scholar at Georgetown University in Washington.

Less than 30 years ago, Venezuela was a prosperous democracy, Smolansky said during his presentation at the summit. The South American nation was drawing immigrants from all over South and Central America. But in 1999, Hugo Chavez came to power and the once democratic nation began to crumble.

Chavez “used democracy to destroy democracy,” he said. “He had the opportunity to participate in free and fair elections. He had independent media. He had a country with independent political branches.”

Now, a third of the population is facing hunger and starvation, and nearly “6 million Venezuelans have fled the county because of the dictatorship,” he said. “This is the largest refugee crisis in the history of Latin America, and the second-largest in the world, only behind Syria.”

“In my opinion, Venezuela is a failed state,” the onetime mayor said.

Smolansky stressed the need for help from the international community to solve the crisis in Venezuela because Maduro “has become a threat to the region.”

Just as the communist leaders are united, Smolansky said, “we have to be more united to beat them and to have freedom.”

‘My Sister Is a Victim’

Rushan Abbas’ sister, Gulshan Abbas, was arrested in China in 2018 and subsequently sentenced to 20 years in prison after a “sham trial.” Her crime? Associating with her sister’s U.S.-based advocacy group, Campaign for Uyghurs.

Rushan Abbas, 54, came to America from China in 1989 and began a human rights campaign for the Uyghur people. She founded the Campaign for Uyghurs in 2017, with a mission to “advocate and promote human rights and democratic freedoms for Uyghurs.”

Uyghur Muslims are a minority population in Xinjiang, China. The Chinese Communist Party has been persecuting Uyghurs for decades, placing them in reeducation facilities, subjecting women to forced sterilization, and exploiting them for slave labor.

The actions against the Uyghur people constitute “an active genocide in my homeland today,” Abbas said at the summit.

Within the past five years, the truth of what’s happening to Uyghurs has made its way into the mainstream media, but Abbas lamented that still not much is being done to stop the human rights abuses that now even her sister has fallen victim to.

Abbas said she was speaking out about the abuses against the Uyghurs “at the sacrifice of my own sister’s freedom.”

“She was taken as retaliation for my advocacy work here in America,” she said.

Abbas said that the Australian Strategic Policy Institute reported that the Uyghur birthrate has declined by nearly half. That’s the direct result of the Chinese Communist Party seeking to ensure that a new generation of Uyghurs are never born, she said.

“But because the perpetrator of these crimes against humanity is China, with money and power, the world is silent,” she said.

Abbas criticized companies like Nike for turning a blind eye to China, using Uyghur slave labor for the production of shoes, clothing, and other products there. She also condemned the international community’s decision to reward China by awarding the 2022 Winter Olympics to Beijing and Hollywood for being run by “China’s money.”

“The conscience of humanity is at test today, and we are failing,” the human rights activist said. There is no shortage of information on what is happening to the Uyghur people, so “we cannot claim ignorance anymore.”

Many men and women have risked—and given—their lives to fight for freedom in Cuba over the past 62 years since Castro took power in 1959. Now, a group of Cuban artists, known as the San Isidro Movement, is advocating democracy.

For the past three years, the artists have been protesting and demanding the right of artistic free expression in Cuba, John Suarez, the executive director at the Center for a Free Cuba, said at the summit. The group is being credited for playing a role in spurring the current pro-democracy protests.

Artist Luis Manuel Otero Alcantara is one of the leaders of the movement. After Cuban authorities raided the group’s headquarters several months ago, “hundreds of artists took to the streets … demanding freedom of expression, artistic expression in Cuba,” Suarez said.

The artist went on a hunger strike earlier this year to protest the totalitarian Cuban regime that has left the country’s economy crippled and many people without enough to eat. Otero Alcantara gained national attention for the strike, becoming one of the leading pro-democracy voices in Cuba.

Otero Alcantara also participated in the creation of a song that has now become the rallying cry for the current pro-democracy protests in Cuba. The song, “Patria y Vida” (“Homeland and Life”), is in direct opposition to Castro’s mantra “patria o muerte” (“homeland or death”).

The rap song has become a protest chant for freedom across Cuba.

“The Cubans lost their fear, and freedom is awaiting them,” Rep. Maria Elvira Salazar, R-Fla., said during brief remarks at the summit. Salazar represents Florida’s 27th Congressional District, which includes Miami. More than 25% of Miami-Dade County residents are Cuban-born.

The “San Isidro Movement shows that heroes come in all forms,” Salazar said. “Apart from the traditional soldiers and political leaders, they can be poets and musicians.”

Otero Alcantara and the other artists in the movement have recognized the “Castro regime for what it really is—evil,” the Florida lawmaker said.

The Cuban people are chanting “Patria y Vida,” Salazar said, because “they know that freedom, hopefully, may God allow it, is very close.”