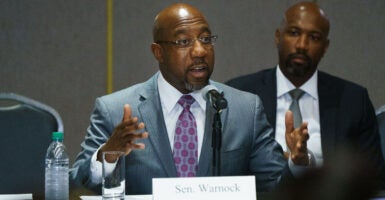 "Spurred on by the big lie, these same actors are now rolling back voting rights in a way that is unprecedented in size and scope since the Jim Crow era,” Sen. Raphael Warnock, D-Ga., testifies Monday during a Senate Rules Committee hearing on Georgia's new voting law in Atlanta. (Photo: Elijah Nouvelage/Getty Images)

Senate Democrats took their push to nullify state election laws on the road Monday, holding a “field hearing” in Atlanta to attack Georgia’s recent election reforms and promote their bill to eliminate voter ID and other requirements.

Only Democrat members of the Senate Rules and Administration Committee showed up to question witnesses, also all Democrats.

Committee Chairwoman Amy Klobuchar, D-Minn., said Republicans had the opportunity to call a witness to defend the Georgia law, but didn’t request one. A spokesperson for the committee’s ranking member, Sen. Roy Blunt, R-Mo., didn’t respond Monday to The Daily Signal’s emails and phone inquiries on this point.

The hearing, held at the National Center for Civil and Human Rights, included numerous assertions, some true, but others debunked in previous fact checks.

Here’s a look at six big claims from the hearing in Atlanta, which Democrats titled “Protecting the Vote.”

Sen. Raphael Warnock, D-Ga., isn’t a member of the Rules and Administration Committee, but was the first witness in his home state. Warnock, who took office in January, criticized Georgia’s election reform law for “reducing the number of drop boxes where voters can return those ballots.”

Klobuchar jumped in later to say, “If you’re looking for evil, you can find it pretty easily” in the Georgia law.

“Drop-off boxes cannot stay open beyond the time of the early voting,” Klobuchar said, adding, “Some of these voters were working day and night, several jobs, then they can’t go to a drop-off box.”

The fact is that ballot drop boxes weren’t used in Georgia nor in most other states before the 2020 election, which took place during the COVID-19 pandemic.

But for Senate Bill 202, passed by Georgia lawmakers, officials wouldn’t have to provide drop boxes in future elections. That said, fewer drop boxes will be available as those elections presumably take place without a pandemic.

Each county in Georgia must provide at least one drop box under the law. But boxes will have to be located near early-voting sites and be accessible for dropping off absentee ballots when those polling locations are open.

Democrat senators and witnesses argued that the law in Georgia and other election reforms across the United States were prompted by former President Donald Trump’s claim that his election loss in November to President Joe Biden was fraudulent.

“We saw record-breaking voter turnout in our last elections—participation that should have been celebrated—get attacked by craven politicians, and, spurred on by the big lie, these same actors are now rolling back voting rights in a way that is unprecedented in size and scope since the Jim Crow era,” Warnock said.

Biden beat Trump by about 12,000 votes out of 4.9 million cast, according to official final results, to win Georgia’s 16 electoral votes.

“I define its success not by our candidates’ winning their elections, but by the fact that when you have as many people vote as we did in the 2020 election cycle, with as few problems, with all challenges being dismissed—you have to consider that to be successful,” Mitchell said.

Mitchell later said “The Heritage Foundation and others” were pushing election reform legislation.

The Heritage Foundation, a leading conservative think tank, is the parent organization of The Daily Signal.

“When you have the highest levels of voter participation, combined with the lowest levels of challenges, why would you want to change that?” Mitchell said.

However, The Atlanta Journal-Constitution last week reported that digital ballot images show that Fulton County election officials scanned about 200 ballots two times in the November election. Skeptics of the election results argue that apparent double counting is evidence of a need for a closer examination of ballots in Georgia.

The newspaper noted that the discovery was unlikely to change the election results in Georgia. But some conservative commentators, such as Fox News Channel’s Tucker Carlson, expressed concern about the finding.

The duplication of at least 200 ballots is evidence of problems with tallying votes in Georgia, but far from proof that the state’s election results were affected in Biden’s favor.

One of the more compelling witnesses was neither a lawmaker nor an activist, but a voter named Jose Segarra. The Air Force veteran told his story of waiting in line for hours.

“I, along with thousands of Georgians, had to wait for hours in order to cast my vote in the 2020 general election,” he said.

“Our government needs to ensure that we have adequate systems and processes in place to allow every eligible voter to cast their ballot without such undue burdens,” Segarra said without specifying federal or state government, adding:

To do this, we need to have an adequate number of polling locations and these locations to be properly resourced and open for as expansive a period as possible. Voters should have the opportunity to vote on Saturdays and Sundays. Lots of people work on Saturdays, so Sundays need to be an option. It would also make it much easier for some people to vote if Election Day were a federal holiday.

The law added early voting on two Saturdays and one Sunday that previously were not available to Georgians, stating:

Requiring two Saturday voting days and two optional Sunday voting days will dramatically increase the total voting hours for voters across the state of Georgia, and all electors in Georgia will have access to multiple opportunities to vote in person on the weekend for the first time.

Previously, some rural counties didn’t provide for early voting for eight hours on a workday, The Washington Post reported.

Warnock announced new legislation he is co-sponsoring with fellow Senate Democrats Jeff Merkley of Oregon, Mark Warner of Virginia, and Jon Ossoff of Georgia. Ossoff, like Warnock, took office in January after defeating a Republican incumbent in a special election.

The legislation, called the Preventing Election Subversion Act, seeks to prevent the overturning of elections based on mass challenges or by legislators controlling the makeup of a state board of elections.

The proposal is tied directly to provisions that Warnock said are in SB 202, the basis of Georgia’s new law.

Warnock said Georgia’s law would let “a single person make unlimited, mass challenges to the ability of other Georgians to vote, clearing the way for baseless accusations.”

The language of the law does make it more difficult for government officials to outright dismiss a complaint about election procedures and ballots. Specifically, it says:

There shall not be a limit on the number of persons whose qualifications such elector may challenge. Upon such challenge being filed with the [local] board of registrars, the registrars shall set a hearing on such challenge within ten business days after serving notice of the challenge.

As another justification for his legislation, Warnock argued that Georgia’s new law “allows partisan officials in the state Legislature to control our state board of elections and take over local election administrators, and it allows them to engage in these takeovers even as the votes are still being cast.”

The Associated Press reported in March that under the new law, the Legislature does indeed have an increased role in the State Election Board, but it can’t overturn elections at a whim, as Warnock seemed to suggest.

Georgia’s elected secretary of state has a diminished role in elections under the new law. This is the basis for Democrats’ claim that partisan politics could play a role.

“The secretary of state will no longer chair the State Election Board, becoming instead a non-voting ex-officio member,” Georgia Public Broadcasting explained in a report. “The new chair would be nonpartisan but appointed by a majority of the state House and Senate. The chair would not be allowed to have been a candidate, participate in a political party organization or campaign or [have] made campaign contributions for two years prior to being appointed.”

“Election bills were rushed through without public input and voted out along party lines,” Harrell said. “Questions addressed to bill authors by minority members were frequently answered dishonestly and disrespectfully. … In the nine years I have served in the [Georgia] General Assembly, I have never seen such blatant disregard for the legislative process as I did with the passage of SB 202.”

Previous media reporting shows the legislation moved quickly through the Legislature to Kemp’s desk. Questioning this speed has been a consistent line among critics, including the U.S. Justice Department.

Assistant U.S. Attorney General Kristen Clarke, who is leading the federal lawsuit against Georgia’s voting law, has said the bill was “a rushed process that departed from normal practice and procedure.”

“The version of the bill that passed the state Senate … was three pages long,” Clarke said in June during a press conference announcing the litigation. “Days later, the bill ballooned into over 90 pages in the House. The House held less than two hours of floor debate on the newly inflated SB 202 before Gov. Kemp signed it into law the same day.”

Warnock also complained that Georgia’s election law is “making it harder for community organizations to assist voters, whether from requesting a ballot to just handing out a bottle of water.”

The law prohibits campaign workers from distributing food, drink, or anything else of value to waiting voters, and from setting up a table within 150 feet of the building or 25 feet of a voter.

However, the law specifically allows official poll workers, as opposed to campaign workers, to provide water to voters.

As for the “community organizations” Warnock cited, the law prohibits ballot harvesting, a controversial practice in which  political operatives obtain large numbers of ballots from election officials and then deliver the ballots to those officials once they’ve been voted.

The practice has been used to achieve fraud in several elections, among them a North Carolina congressional race later overturned in court and a Texas mayor’s race that led to multiple indictments.