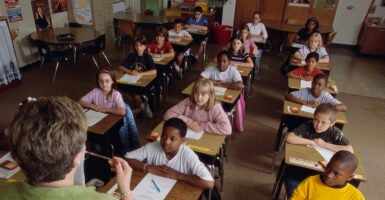 Teachers simply are not qualified to walk other people’s children through the many ethical and medical decisions parents and doctors must consider involving youngsters with gender dysphoria. (Photo: Will & Deni McIntyre/Corbis Documentary/ Getty Images) 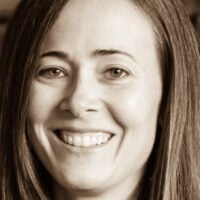 Amy Haywood is a former senior legislative assistant for a member of Congress, writer, and educator. She holds a master’s degree in national security and strategic studies from the Naval War College.

Our men and women in uniform are prepared to lay their lives on the line every day to uphold the Constitution and protect the nation from enemies who would do us harm, but what many service members may not realize is that a personal threat to their families exists much closer to home.

As parental outrage with “progressive” curriculums—for example, comprehensive sex education, gender identity, and “anti-racist” programs—sweeps across the country, military parents have good reasons to be up in arms.

That’s because Department of Defense Education Activity schools, institutions that educate children from military families, are helping children change their names and pronouns at school behind parents’ backs. In doing so, they’re violating the Constitution.

A parent’s right to oversee the care, education, and control of his or her child is guaranteed by the 14th Amendment, and was affirmed by the Supreme Court in 1923, in Meyer v. Nebraska, and as recently as 2000, in Troxel v. Granville.

They are also undermining morale and military readiness as challenges at home can distract service members from the military mission.

The examples are plentiful.

Video evidence from the Department of Defense Education Activity’s Equity and Access Summit in May shows that in one case at a school in Rota, Spain, a seventh-grade language arts and high school humanities teacher—who is also a Gay-Straight Alliance sponsor—told teachers that in some instances they will need to protect children from parents who do not know about their child’s gender “transition.”

She identified an example of a substitute teacher who did not know that her own child at the school had chosen a different gender.

Another conference presenter, who teaches English and drama at a high school in Stuttgart, Germany, and is also a Gay-Straight Alliance sponsor, has gone the extra mile to assist children with their gender transitions at school.

She noted that while some parents are fully on board with their child’s gender-transition plans, other parents are labeled as “unsupportive” and have no idea that their children have transitioned at school.

To “out” children to their parents, said the teacher, would be “unsafe” and would put them “at risk” at home. For these children, she claimed, school might be the only safe place for them to be their authentic selves, with their chosen “safe” adult.

Activist Gay-Straight Alliance sponsors are assuming the roles of medical professional and parent as they facilitate secret gender transitions at school.

That wasn’t discussed or debated, much less approved by American parents, before being implemented.

Gender dysphoria is a real issue that should not be hidden from parents who are best positioned to guide their own children through treatment. Teachers simply are not qualified to walk other people’s children through the many ethical and medical decisions parents and doctors must consider.

Parents with a solid understanding of basic biology and respect for evidence-based science will likely take a different approach from woke educators who favor an affirmation-only approach that in most cases leads to persistence in a transgender identity.

The tragic case of Keira Bell underscores how important it is for parents to dig deeper and get involved before life-altering interventions are pushed by educators.

Living in a broken home in the United Kingdom, Bell felt detached from her mother, who suffered from alcoholism and mental illness, and from her father, who was emotionally and physically distant. At the age of 14, she became severely depressed and began questioning her identity.

Bell began seeing a psychologist who referred her to the Tavistock Gender Identity Development Service, the U.K.’s National Health Service specialist gender clinic for pediatrics, when she was 15. The clinic diagnosed her with gender dysphoria. At 16, after only three one-hour appointments, the clinic prescribed puberty blockers. Later, Bell progressed to testosterone treatments.

Though her father strongly opposed her transition, she underwent a double mastectomy at 20. She has since detransitioned, and at 23, sued Tavistock, claiming she was too young to make such consequential decisions as beginning puberty blockers and that adults should have challenged her thinking more before pushing her to transition.

In December, Britain’s High Court sided with Bell. Tavistock appealed the ruling, and the appeal was heard on June 23 and 24. Judgment is pending.

The questions are many, and the science is far from settled. For example, will a social transition increase a child’s feelings of well-being? Do children understand that puberty blockers are experimental and can have dangerous side effects? Would it be better to allow the child to grow out of gender dysphoria as most children do when allowed to go through puberty naturally?

Could the child have a case of rapid onset gender dysphoria due to peer group and online influences? Do children understand that often the next steps after a social transition are a prescription for puberty blockers, then cross-sex hormones, and perhaps a surgical transition? Have other people also regretted transitioning?

While military members and spouses may be prepared to make the ultimate sacrifice, they have not agreed to sacrifice their relationships with their children at the hands of some Department of Defense Education Activity teachers.

Congress sets policy for, and can exercise oversight over, Department of Defense Education Activity schools that are undermining parental rights guaranteed by the Constitution and undermining military readiness by wreaking havoc on already stressed families.

Congress could forbid military schools from hiding gender transitions from parents and spell out consequences for violators. Until that happens, parents need to wake up and get involved.

Department of Defense Education Activity schools are flouting the very laws that military parents have sworn to defend, and activist educators should top the list of “extremists” that Defense Secretary Lloyd Austin has committed to rooting out of the military.