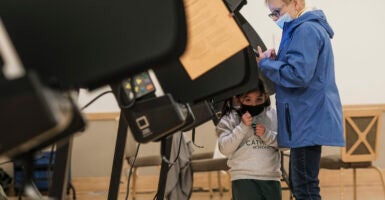 "Democratic political operatives will stop at nothing to try to get this done,” Ohio Secretary of State Frank LaRose says of a bill in Congress to take over states' election administration. Pictured: Voters cast their ballots Nov. 3 at Congregation Agudas Achim in Columbus, Ohio. (Photo: Matthew Hatcher/Getty Images)

The partisan divide in Washington is clear on a bill in Congress to eliminate most state voter ID laws while nationalizing election laws, but bipartisan consensus exists among local election officials, Ohio Secretary of State Frank LaRose says.

“I can tell you in Ohio, as I talked to election officials—men and women that actually work at the Board of Elections on a daily basis—that on a bipartisan basis they were concerned about this dangerous bill,” LaRose, a Republican who is the top election administrator in the Buckeye State, told The Daily Signal in a recent phone interview.

In a major speech Tuesday in Philadelphia, President Joe Biden made a strong, partisan-tinged push for passage of the For the People Act, which critics call the “Corrupt Politicians Act.”

Democrats’ bill, known as HR 1 in the House and S 1 in the Senate, would ditch most state voter ID laws, promote the controversial practice of ballot harvesting, allow automatic voter registration, and restrict updating of voter registration rolls.

The legislation passed the Democrat-controlled House, but died in the Senate, split 50-50 between the parties, in a Republican filibuster.

“This will be a zombie that will keep coming back from the dead,” LaRose said of the legislation that House Speaker Nancy Pelosi, D-Calif., identified as her No. 1 priority. “The Democratic political operatives will stop at nothing to try to get this done.”

Ohio’s top election official said he has worked to educate fellow Ohioans about Democrats’ innocuous packaging of the For the People Act.

“We were just making sure Ohioans weren’t fooled by their sales tactics, because this bill was never for the people,” LaRose said. “This bill was for the Democratic political operatives. And it’s a great thing we’ve been able to defeat it.”

LaRose said he found it absurd that Senate Majority Leader Charles Schumer, D-N.Y., backs a bill to nationalize elections when he should look at his own state.

“When you look at what is going on in New York City right now, they seem to not be able to run a simple mayoral election in the city,” he said in the July 2 interview, adding:

For people like [Schumer] to be telling us in Ohio how to run our elections with bills like HR 1 is, again, the height of hypocrisy. He ought to focus on his own backyard, where they seem to have some pretty massive problems with the way they run elections. These bipartisan election officials in Ohio that know how to do it really well, let us run our elections in Ohio.

LaRose, elected secretary of state in 2018 and in that office since January 2019, previously served two terms in the Ohio Senate.

Another provision of congressional Democrats’ election overhaul would prohibit states from updating and cleaning voter registration rolls. This is a key issue for Ohio, LaRose said.

In 2018, in a case called Husted v. A. Philip Randolph Institute, the U.S. Supreme Court upheld Ohio’s law to maintain voting rolls by regularly removing the names of dead people, those no longer living in Ohio, and noncitizens.

HR 1 also calls for automatic voter registration, and that would include convicted felons.

The Ohio Legislature is considering a bill, backed by LaRose, to modernize maintenance of voter lists. It would allow voters to update their information, such as a changed address or name, while visiting an office of the Ohio Bureau of Motor Vehicles.

“We want to make it convenient for Ohioans to be registered. We don’t support so-called automatic voter registration that happens without the voter’s consent,” LaRose said. “But this just makes a more straight-line way to get registered when you come into the BMV.”

Attacks on clean and fair elections aren’t “these numerous conspiracy theories that are out there about elections,” the secretary of state told The Daily Signal, but rather are in plain sight not only in Congress but in politically motivated court cases.

Such lawsuits likely would be encouraged by another Democrat bill in Congress, called the John Lewis Voting Rights Advancement Act, which would create a new federal preclearance formula for states wishing to change election laws.

Based on how many election-related lawsuits a state is involved in, the legislation proposes to place that state under 10 years of federal oversight by the Department of Justice, LaRose said.

Such lawsuits already are a “cottage industry,” he said.

“We’ve seen this in Ohio where some activist group will file a lawsuit against us at 9 a.m. and by 10 a.m. they are sending out fundraising emails,” LaRose said, adding, “They try to sue us and use it as a cynical way to raise money from their base. All this [the federal legislation] would do is put that into hyperdrive and create this crazy incentive for people to sue states like Ohio.”

“I’ve had a chance to cross the bridge in Selma, Alabama, and see where people had to fight for the right to vote,” LaRose said. “That was a real struggle that people should know about and understand that history. But to equate that to this partisan piece of legislation that they are trying to do is, I think, a pretty cynical approach.”