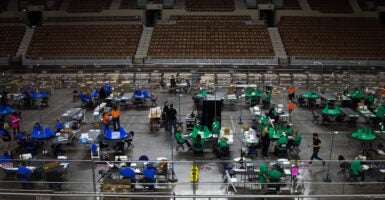 Contractors working for Cyber Ninjas, hired by the Arizona Senate, examine and recount ballots from the 2020 general election at Veterans Memorial Coliseum on May 8. (Photo: Courtney Pedroza/Washington Post/Getty Images)

The Arizona Senate will seek more voter information from the state’s most populous county after a hearing Thursday about an audit’s findings on election results there, The Arizona Republic reported.

The findings on Maricopa County’s presidential election results prompted auditors to pursue a door-to-door canvassing of suspect voters. This was a step that the Republican-controlled state Senate had opted against after the U.S. Justice Department warned against it.

Nearly 4,000 Maricopa County voters in the presidential election registered after the court-ordered deadline of Oct. 15, according to Cyber Ninjas CEO Doug Logan, head of the company that conducted the election audit.

“There was actually a court case that moved it back to Oct. 15,” Logan told senators at the hearing. “Based on the registration information that we found in the voting rolls, we have 3,981 individuals who show having voted in this election [who] were registered after Oct. 15.”

The audit found about 18,000 voters who voted in November were removed from the voter rolls after the election, Logan said.

Logan also specified 74,243 mail-in ballots “where there is no clear record of them being sent.”

“I think when we’ve got 74,000 [questionable ballots], it merits knocking on a door and validating some of this information,” he said.

The state-imposed election audit in Maricopa County, which also is controlled by Republicans, reviewed about 2.1 million ballots.

Maricopa County has about 4 million residents, making it one of the nation’s most populous counties.

In a written statement Thursday evening, Trump called the Arizona Senate hearing “devastating news to the Radical Left Democrats and the Biden Administration.”

The irregularities revealed at the hearing today amount to hundreds of thousands of votes, or many times what is necessary for us to have won [Arizona]. Despite these massive numbers, this is the state that Fox News called early for a Biden victory. There was no victory here, or in any other of the swing states either.

The Biden Justice Department previously warned Arizona officials against doing a door-to-door canvassing of voters in the 2020 election—suggesting it could be considered voter intimidation.

“The Department of Justice sent us a letter about four to six weeks ago and said we are concerned about you actually knocking on doors, that it might be voter intimidation or a civil rights violation,” Senate President Karen Fann, R-Prescott, said at the hearing Thursday. “I find that interesting since the White House last week said we are going to knock on doors to see whether you are vaccinated or not.”

After laughter in the hearing room, Cyber Ninjas’ Logan responded.

Arizona’s presidential election results were among the narrowest of state outcomes in November. Because of its size, Maricopa County was key to Biden’s margin of victory over Trump, who narrowly carried the county in 2016.

The election audit has been controversial in large part because of the involvement of Logan’s Florida-based cybersecurity company. After the 2020 election, Logan publicly expressed skepticism about the extent of election fraud across the nation.

And because Maricopa County is a Republican-run jurisdiction, the audit largely has pitted county Republicans against their GOP counterparts in the state Legislature.