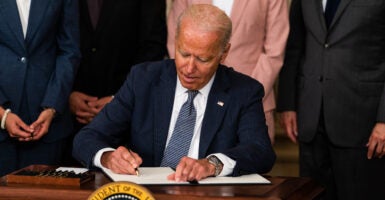 The order, though, is yet another far-left directive to promote federal government intervention in the economy, pushing policies that may not even be authorized by Congress and that could trample on states’ rights.

It punishes economic success and presumes that when a business gets big, its size is inherently harmful.

The order would have federal bureaucrats centrally plan the economy and arrogantly assumes they know how industries should be structured. Nobody, including the federal government, has the knowledge to be able to make those types of decisions.

It would empower bureaucrats to further micromanage how businesses operate and serve their customers, such as by trying to dictate airline and shipping practices, meddling with private railroad contracts and threatening the railroads’ property rights, and making it much more difficult for firms across the economy to grow through mergers and acquisitions.

The Biden edict claims to promote competition, yet it actually suppresses it and hinders innovation. The order protects failed incumbents by encouraging them to go to the government for favors to help them against companies that customers actually prefer.

If you think cronyism is bad now, this executive order would make it much worse.

The executive order would bring back the so-called net neutrality rules that would hurt competition by, for example, making it more difficult for new internet service providers to attract new customers away from existing ones by offering differentiated services.

It would discourage technology startups from getting started in the first place by blocking the most popular “exit strategy” for startup firms; namely, getting acquired. Some of the most dynamic new businesses in America came out of this process, and slamming that door shut might slam the door altogether on the next generation of innovators.

The executive order discusses concerns over a handful of firms allegedly dominating industries, such as in the meat industry. Yet it fails to acknowledge how the government’s own meddling drives those structural outcomes. For example, it fails to mention that federal regulations create barriers for the sale of meat and poultry products in ways that favor the largest processing plants.

As is too common with the far left, the Biden executive order reflects an extremely pessimistic view of the country.

In reality, the U.S. is the envy of the world across industries, from farming to trucking to technology, because American companies best meet the needs of consumers. That success is because of the innovation and hard work of American individuals and businesses, not because of bureaucrats in Washington, D.C.

That isn’t to say that the federal government shouldn’t be concerned with competition. It should. But if the Biden administration is concerned about competition issues, it should first examine how the government itself is creating competition problems to begin with.

For example, existing and rapidly multiplying regulations discourage new competitors from entering markets, reduce innovation, and hurt consumers.  High regulatory costs force companies out of business, especially small businesses that can’t keep up with the regulatory onslaught. For the survivors, their ability to expand, grow, and hire workers can slow to a crawl.

Biden in this same executive order seems to recognize the harm government causes, such as through state occupational licensing laws.  But he doesn’t connect the dots to a wider stand-down on job-killing regulations.

It shouldn’t come as a surprise that Biden wouldn’t focus on how the government is the problem, since his administration regularly views the government—and not the American people—as the way to solve alleged problems.

President Ronald Reagan amusingly and correctly stated, “The nine most terrifying words in the English language are ‘I’m from the government, and I’m here to help.’”  The Biden administration is showing us why.

So, what should conservatives be doing? They should address competition issues at the source by getting rid of government policies that discourage or prevent individuals from starting businesses or simply being able to engage in their desired professions.

Conservatives should call out the hypocrisy of the administration and the far left who claim to want to promote competition while simultaneously pushing policies that will hurt competitors and the consumers who benefit from competition through lower prices, increased choices, and higher-quality goods.

Most of all, conservatives should recognize that this is an incredible opportunity to distinguish ourselves from the far left by promoting our core principles.

Wealth is created by the American people, not the government. The government’s role is to create an environment where individuals and businesses can compete and earn success on their own merits, not to intervene to pick winners and losers, or to dictate what competition should look like.

Cronyism and corporate welfare, which are the antithesis of competition and our free enterprise system, need to be rooted out.

It’s time to proactively push a specific agenda to achieve those ends. The Biden administration has shown its hand. Now, it’s time for conservatives to do the same.

When we do, economic freedom, property rights, limited government, and a flourishing civil society will win hands down.