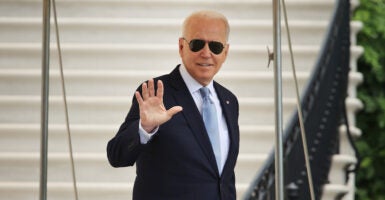 Adam Andrzejewski is the CEO and founder of OpenTheBooks.com, a government watchdog organization working to capture and disclose spending at every level online.

President Joe Biden has wasted no time filling out his White House staff, employing 567 people at a projected cost of $200 million over his four-year term.

The current White House’s payroll is the most expensive in America’s history—at nearly $50 million in annual cost. That is 190 more employees than Donald Trump’s 377, and 80 more than Barack Obama’s 487 at the same time in their respective presidencies.

The highest-paid Biden employee is Molly Groom, making $185,656 as policy adviser for immigration, a crisis issue for the administration. Followed closely behind is Elizabeth Hone, earning $183,164 as senior policy adviser for broadband.

>>>Search the payroll at OpenTheBooks.com for specific employees, their titles and pay.

While the White House payroll is a fraction of the $4-plus trillion federal budget, the president’s willingness to increase the staff could very well be a leading indicator of his commitment to expand the size, scope, and power of the federal government at large.