Trump’s Lawsuits Against Big Tech Will Go ‘All the Way’ to Supreme Court, Backers Say 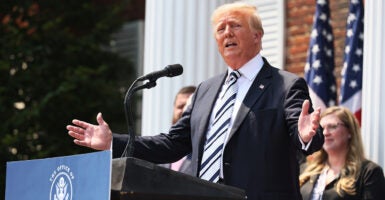 “Ultimately, we are going to take [the case] all the way,” Brooke Rollins, president and CEO of the America First Policy Institute, said in a press call Thursday afternoon.

When Newsmax’s Emerald Robinson asked Pam Bondi, chairwoman of Constitutional Litigation Partnership and a former state attorney general of Florida, to clarify how far the group thinks the case will go, Bondi said both the attorneys on the case and the America First Policy Institute “believe it will go to the United States Supreme Court.” The Constitutional Litigation Partnership was established under the America First Policy Institute to fight the legal battles that threaten Americans’ freedoms.

Trump announced the class-action lawsuits against Facebook, Twitter, Google, and the companies’ CEOs on Wednesday. Speaking to reporters at his golf club in Bedminster, New Jersey, the former president said he was taking action against the tech giants over their censorship of him and many other Americans.

“There is no better evidence that Big Tech is out of control than the fact that they banned the sitting president of the United States earlier this year,” Trump said. “If they can do it to me, they can do it to anyone.”

Trump filed the suits in conjunction with the America First Policy Institute. The Arlington, Virginia-based nonprofit was founded in April by a group of former Trump administration staffers and has as its mission to “develop policies that put the American people first,” according to its website.

The America First Policy Institute is fulfilling that mission by working to create job opportunities for Americans, to ensure young people are provided the best education possible, to secure America’s borders, and to strengthen adherence to the principles found in the Declaration of Independence and Constitution.

Trump is the lead representative of the class-action lawsuits that have been filed in the U.S. District Court for the Southern District of Florida. Americans are invited to share their personal experiences of being censored by Big Tech companies at TakeOnBigTech.com.

The legal action “isn’t about one person,” said Bondi, who served as one of Trump’s defense attorneys during his first impeachment trial. “It isn’t about just the class of people who are joining this lawsuit. It’s about every American citizen and one of our most basic rights guaranteed to us in the Constitution—the right of freedom of speech.”

“This quarter, Big Tech earned a collective ‘F,’ the Media Research Center reported in April. The group said the low score was a result not only of the platforms censoring Trump, but also groups such as the pro-life LifeSiteNews, whose YouTube channel was shut down.

While the America First Policy Institute is not acting as the legal representation on the case, the group has “established the Constitutional Litigation Partnership,” which is composed of a team of lawyers who will argue the case. John Coale, a prominent, semi-retired D.C. lawyer, is one of the leading attorneys representing Trump. He is best known for his litigation against Big Tobacco in the 1990s.

Rollins, who served in the Trump administration’s Office of American Innovation and on the Domestic Policy Council, explained during Thursday’s press call that the legal action is an opportunity for conservatives to take action against the far left’s agenda.

“What this case brings to bear is the opportunity to go on offense and to really begin to retake our country and lift the Constitution up,” she said.

Trump says the case will prove that the censorship he and many other Americans have experienced at the hands of Big Tech is “unlawful, it’s unconstitutional, and it’s completely un-American.”