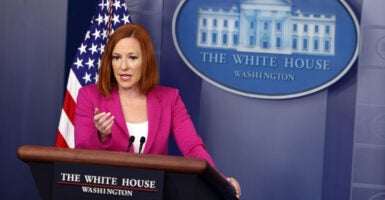 White House press secretary Jen Psaki, pictured June 22, said last month in a briefing that "Some might say that the other party was for defunding the police ... " all because congressional Republicans won't sign off on two "infrastructure" bills.(Photo: Kevin Dietsch/Getty Images)

Most of us recall as children getting into a dispute with another kid and then blaming him for starting a fight. When Mom approached, you said, “He hit me first.” The other kid denies it and accuses you of hitting him first.

As adults we become more sophisticated when lying. That’s why White House press secretary Jen Psaki said last month in a briefing that “Some might say that the other party was for defunding the police … ” all because congressional Republicans won’t sign off on two “infrastructure” bills.

Psaki is channeling the line of the day from Democrats who want to divert attention from Democratic mayors and city councils across the country who have voted to take money away from police departments, causing cops to quit, retire, and making it difficult to attract new recruits.

The facts say otherwise, that is if facts matter anymore.

Oakland, California, a city run and ruined by Democrats for years, decided to cut the police budget by $18 million while crime is spiraling out of control. Shootings in Oakland have increased by 70%, homicides by 90%, and carjackings by 88%. Burglaries, rapes, and other crimes have also significantly increased.

Anyone who doesn’t see a connection between cutting police budgets and rising crime is smoking dope, which by the way, is becoming legal in more states.

At least 13 other cities have cut police budgets, cities all run by Democrats.

Forbes magazine is keeping track. Perhaps the most ridiculous decision, among many, is one made by the City Council in Austin, Texas. Forbes reports it “vot[ed] unanimously to cut $150 million (roughly one-third) from the police budget, reinvesting much of that sum in social programs, including food access, violence prevention and abortion access.”

How does “abortion access” reduce violent and property crime, especially since abortion is violence against innocent unborn human life?

It’s not that social programs are an untried strategy to reduce crime. Trillions have been spent on them. “Midnight basketball” was tried during the Clinton administration on the theory that shooting hoops would dissuade teens from shooting each other. Like so many other feel-good programs, this one failed to reach its stated goal. At least in that basketball bill was a provision to hire 100,000 additional police officers.

The reason we have the law and police officers sworn to enforce it (and politicians who take oaths to uphold the law) is that there are people who won’t obey the law under any circumstances. The left has used incidents of police brutality and alleged racist behavior to advance an agenda that harms the very people who want and need police protection.

TV interviews of residents in cities and neighborhoods with large minority populations have shown they don’t want fewer police, but more. They don’t feel safe and now neither do increasing numbers of police officers who fear for their lives and careers if they attempt to apprehend suspects.

Democrats would not be getting away with their ridiculous claim that Republicans are responsible for defunding police without a compliant media and the apparent disappearance of Trump-era fact-checkers.

Thomas Jefferson was right when he said this about liars: “He who permits himself to tell a lie once, finds it much easier to do it a second and third time, ’til at length it becomes habitual … “

Ms. Psaki, are you and your fellow Democrats paying attention?