US Support for 3 Seas Initiative Is Smart, Strategic 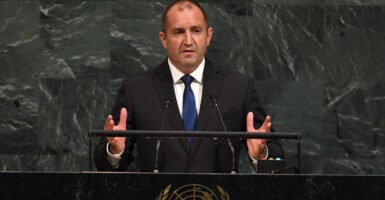 Bulgaria on July 8 and 9 will host the fourth business forum of the Three Seas Initiative, commonly referred to internationally as “the 3SI.”

This forum will feature five panels, on energy, innovation, transport, and digitalization, and a special session focusing on the Three Seas Initiative Investment Fund.

From Washington’s foreign policy perspective, the 3SI—launched in 2016 to facilitate greater development and connectivity among 12 European Union countries around and between the Baltic, Black, and Adriatic seas—is the most significant political and economic policy initiative to emerge in Central and Eastern Europe in the past half-century.

Bulgarian President Rumen Radev emphasized that “we are working together to make our region much more attractive for investments and to young people,” and that’s “why we need concrete, practical actions.”

Indeed, the upcoming Sofia business forum offers a critically timed opportunity for the 3SI partners to work together to reboot and revitalize their economies in the COVID-19 era. Advancing pragmatic policies that enhance economic freedom and advance shared values should be a focal point for Washington’s strategic interaction with the 3SI countries.

Notably, the objectives of the 3SI are very much in line with a number of broad U.S. security and strategic economic goals, and they have received congressional interest and support. Expressing unambiguous support for the 3SI, the House of Representatives unanimously passed a bipartisan resolution that included 43 co-sponsors in November.

In February, a bipartisan group of members of Congress urged the Biden administration to continue the previous administration’s pledged financial support for the 3SI and called on the Development Finance Corp.—the U.S. government’s development finance institution—to finalize its approved $300 million investment. It cited concern over infrastructure deficiencies that make the 3SI region “overly dependent on Russia and China for energy and economic needs.”

Fundamentally, the 3SI is and should be a practical platform for attracting private sector investors. The initiative’s success is undoubtedly dependent on building public-private partnerships.

Despite notable progress, a number of the 3SI countries need to be encouraged to adopt policies that will lure private investment and spur market-led economic growth and development.

They should be encouraged to adopt more free market policies that facilitate development that is led by the private sector, because the real long-term transformative investments in the critical region will come ultimately from the private sector.

Reaffirming America’s robust support for the 3SI in an address during a Feb. 17 videoconference of foreign ministers of the 12 3SI countries, Secretary of State Antony Blinken emphasized:

The United States has been a strong supporter of the Three Seas Initiative from the start, and it addresses many of our shared priorities. …

Bringing the private sector to the table alongside governments is a smart way to make big infrastructure projects happen. Launching more projects, you can more powerfully demonstrate the value of this initiative—to your constituents and to the world. And a bigger Investment Fund will make that possible.

To date, nine of the 12 3SI members have contributed to the fund. Washington should encourage every member to contribute, while also inspiring relevant 3SI nonmembers, such as France and Germany, to make similar contributions to those of the U.S., which has pledged to match offerings to the Three Seas Investment Fund up to $1 billion.

Continuing and elevating U.S. support for the 3SI, which encompasses a strategic, long-term outlook, is smart foreign policy that will pay dividends for decades to come.

It’s in America’s interest to take a multifaceted approach to advancing its transatlantic foreign policy objectives, building greater economic relationships, and upholding the shared values of democracy and the rule of law through the Three Seas Initiative.