Case of Christian Florist Shows Faith Is Under Attack in US 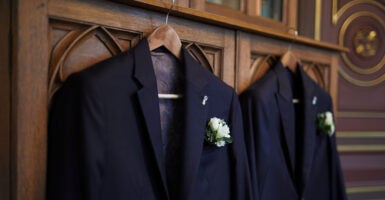 Florist Barronelle Stutzman refused to provide flowers for a same-sex couple because her religious beliefs instruct her that marriage was created by God for opposite sexes. (Photo: Getty Images)

Is there anyone who can say what is always right and always wrong and present an unchanging standard by which all behavior can be judged?

I raise the question in light of last week’s non-ruling by the U.S. Supreme Court, which declined for a second time to hear an appeal from a flower shop owner in Washington state. Barronelle Stutzman, the owner, refused to provide flowers for a same-sex couple because her religious beliefs instruct her that marriage was created by God for opposite sexes.

What confuses many people is that the U.S. Supreme Court ruled in favor of a Colorado baker who refused on the same religious grounds as Stutzman to bake a wedding cake for a same-sex couple.

Why is religious belief a sufficient reason to uphold the Colorado baker’s right not to bake a cake for a same-sex wedding and a violation of another state’s law in the flower shop case? News reports say Stutzman has provided flowers in the past to gay individuals, but not for their weddings.

How far are the courts willing to go with this? Should an Orthodox Jewish or Muslim caterer be forced to violate their religious beliefs when those faiths view marriage as an opposite-sex ritual? What if the same-sex couple also wants pork served at the reception? Jews and Muslims regard pork as unclean food. Would a court order demand they serve the item?

Why do these court challenges appear to have a higher political purpose? There must be flower shops in Washington state and bakeries in Colorado that cater to same-sex weddings. Why pick on the ones that don’t? Is this part of a larger goal to destroy what remains of what used to be known as traditional values?

Basic pillars that have supported America have included religious faith and the military and have been reflected in the stories and characters created by the iconic Walt Disney. These and many others are now under attack.

The Walt Disney Co. has announced a change in its welcoming messages at all properties from “Ladies and Gentlemen, Boys and Girls,” to “Good evening, dreamers of all ages.” A company spokesperson (notice my avoidance of gender specificity) said the decision is in alignment with Disney’s “inclusion and diversity” policy.

Why is it that inclusion and diversity always seem to exclude people who believe differently? Such people are now viewed as criminals in some states if they seek to apply their faith to their businesses and in the public square.

Challenges to traditional values will continue as an older generation that lived by, or at least believed in them, passes away. Younger people who have been baptized by the “woke” culture in their public schools and universities seem to be willing to tolerate just about anything. What will be their new “standard”? Can it even be called a standard if it changes with the times?

The problem for individuals and nations when standards of right and wrong are abandoned is where it leads. Moral anarchy has been one of the contributing factors to the collapse of empires and great nations of the past. Apparently, we think we can escape the judgment of history and the judgment of God by “believing whatever our itching ears want to hear” and doing “whatever seems right in our own eyes.”

Those two quotes are from Scripture. Look them up before a court decides they are not inclusive.