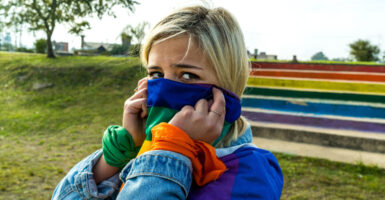 The stated goal of the educators' organization is to provide a solution in gender identity policies for students at their middle school that both satisfies teachers’ consciences and honors parental involvement. (Photo: Jose Luis Raota/EyeEm/Getty Images)

A school board in Oregon will decide whether to fire two educators at a middle school who were placed on leave after producing a video proposing that schools recognize a student’s biological sex, not his or her gender identity.

According to their attorneys at Pacific Justice Institute, Damiano and Medart started a grassroots organization called I Resolve on their own time and using personal accounts on online platforms.

The stated goal of I Resolve is to provide a solution in gender identity policies for students at their middle school that both satisfies teachers’ consciences and honors parental involvement.

Damiano and Medart posted a video on YouTube in March to announce the organization’s launch.

“This is an incredibly important case on multiple levels,” said Ray D. Hacke, an Oregon-based staff attorney for Pacific Justice Institute who represents the two educators. “The Supreme Court has made clear that educators don’t check their freedom of speech at the schoolhouse gate when they accept employment with public school districts—they have as much right to speak out against district policies they consider harmful as any other citizen. The school district erred egregiously here in punishing Rachel and Katie for daring to take the stand they did.”

The Grants Pass District 7 Board of Education is scheduled to hold two meetings July 15 to determine whether Damiano and Medart should be fired, as Superintendent Kirk Kolb has recommended. Damiano and Medart and their attorney will be allowed to respond to Kolb’s recommendation and to answer questions from the school board.

The school board’s discussion is supposed to revolve only around the two educators’ alleged policy violations, not the merits of their organization or the questions and concerns surrounding gender identity and transgenderism.

“At the request of the employees, the hearings will be open, public meetings, with the public permitted to observe via Zoom,” the school district said in a written statement. “Because the record for this hearing will be limited to the documents and information considered as part of the superintendent’s administrative recommendation, no public comment will be allowed.”

It seems facetious to pretend the real issue regarding the women’s ongoing employment isn’t related to controversy over gender identity policies in schools. Specifically, inconsistent, confusing gender identity guidelines that the Oregon Department of Education implemented in “slightly different forms at local districts,” according to local news source KDRV.com.

“We recognize that, excepting very rare scientifically demonstrable medical conditions, there are two anatomical gender presentations, male and female,” Damiano and Medart say at the beginning of their “I Resolve” video.

The women suggest alternatives such as changing the names of “boys” and “girls” locker rooms and restrooms in public schools to phrases such as “anatomically male” and “anatomically female.”

In the I Resolve video, Medart, who teaches seventh-grade science, suggests the need for such phrasing that describes, “in essence,” a person’s genitalia. The women also say that students who are uncomfortable using restrooms with names matching their genitalia should ask to use a private facility.

The women don’t expressly oppose any student’s decision to transition from male to female, but suggest that if a change in personal name is involved, the student use “a derivative of their legal name” to achieve more conformity.

It’s hard to imagine the two educators would have faced disciplinary action or had to file a lawsuit if they’d created a video or online post suggesting that girls and boys may dress however they like or be called whatever names and pronouns they desire.

In fact, a close look at their video shows their material isn’t controversial, but practical. It’s clearly an attempt to allow students freedom to “transition” while bridging gaps among parents, students, and school policies.

The transgender issue has become a real debacle in public schools, but educators such as Medart and Damiano have not made it so. School policies that promote the ideas of the liberal LGBTQ lobby, combined with whatever a federal court has decided, make for illogical, inconsistent policies on the topic.

Many school systems, simply because of the scope and size of the district, set forth specific rules, such as requiring that students use the restroom matching the sex on their birth certificate.

In August 2020, however, the U.S. Court of Appeals for the 4th Circuit ruled in favor of Gavin Grimm, a transgender student in Virginia, by deciding that school restroom policies that separate transgender students from their peers is unconstitutional.

The suggestions made by Damiano and Medart via their organization weren’t likely to be carved into stone in North Middle School’s policies, but what’s the harm in allowing for multiple viewpoints in the spirit of tolerance?

Perhaps their commonsense views would have been a jumping-off point to a different kind of debate, one that allows for tradition, logic, and science—rather than the pervasive view that transgender students should be able to waltz into whatever bathroom they desire, to the chagrin of other students and their privacy.

It’s disappointing to see how far the Grants Pass school district went in placing this teacher and assistant principal on leave just for making such commonsense suggestions in their private time.

The school system’s decision calls into question why public schools would adopt the most liberal take on the transgender issue as their own and condemn anyone who suggests a more conservative view.