Unions Double Down on Inserting Critical Race Theory Into Education 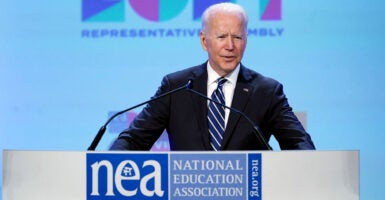 Periodically, it’s worth checking teachers union priorities. Such reviews find just how much these special-interest groups are disconnected from mainstream opinions on the role of schools in society. We also find how singularly focused they are on political fads, such as the toxic ideology of critical race theory, instead of improving the state of American education.

The most recent example of this leftist mission creep is a slate of critical race theory-based resolutions the National Education Association—the country’s largest teachers union—adopted at its 2021 annual meeting earlier this month. The NEA adopted New Business Item 39, a massive commitment to push critical race theory in public school classrooms across the country.

The intent of the resolution is to disseminate a study that “critiques empire, white supremacy, anti-Blackness, anti-Indigeneity, racism, patriarchy, cisheteropatriarchy, capitalism, ableism, anthropocentrism, and other forms of power and oppression at the intersections of our society … ”

Every “ism” is out to get you, and the union is devoting money from teacher paychecks to make sure you feel threatened.

Part C of the resolution notes: “The Association will further convey that in teaching these topics, it is reasonable and appropriate for curriculum to be informed by academic frameworks for understanding and interpreting the impact of the past on current society, including critical race theory.”

Contrary to those who claim “teaching critical race theory isn’t happening in classrooms,” as stated in a recent NBC headline, the NEA resolution promotes the use of the doctrine in 14,000 school districts across the country.

The union also adopted New Business Item 2, which supports the NEA doing “research” into organizations critical of efforts to infuse critical race theory’s discriminatory practices into elementary and secondary schools across the country.

The item specifically states: “The attacks on anti-racist teachers are increasing, coordinated by well-funded organizations such as the Heritage Foundation. We need to be better prepared to respond to these attacks so that our members can continue this important work.”

Speaking of “well-funded organizations,” total NEA revenue for the 2018-19 fiscal year exceeded $427 million. Together, the NEA and the American Federation of Teachers have a combined membership of over 4.5 million and a budget of over $550 million each year.

Concern over critical race theory has been directed at the nebulous discipline itself and the implementation of its core beliefs in schools, not against teachers who rightly grapple with difficult issues in the classroom.

Students should learn about the horrors slavery visited on the Africans who were enslaved and their American-born descendants, about the blight of segregation in the South, and the stain of Jim Crow laws. And we must continue to deal strongly with racism and discrimination whenever it emerges, and prosecute it.

That is because at its core, critical race theory would upend the principles that set America apart as a nation founded on individual liberty. As a pair of critical race theory architects and a married couple, Richard Delgado and Jean Stefancic wrote in “Critical Race Theory: An Introduction”:

Not only do parents not want their children to be taught to reject the “foundations of the liberal order” or shun the rationalism born of the Enlightenment, but they do not want their children’s schools and districts to operationalize the theory through practices like segregated “affinity groups,” financing diversity, equity, and inclusion programs that separate faculty by race, or compelling teachers and students to believe that individual Americans should be treated unequally according to skin color to forcibly produce equal outcomes.

The NEA isn’t alone in promoting critical race theory. Ibram Kendi is speaking at the American Federation of Teachers’ conference this week (where teachers can also earn professional credits for attending).

This year’s resolutions, business items, and main stage speakers are just the most recent examples of progressive positions taken and promoted by these taxpayer-funded unions.

Incredibly, the NEA defeated an internal business item in 2019 calling to “re-dedicate itself to the pursuit of increased student learning in every public school in America by putting a renewed emphasis on quality education.”

With millions of teacher members, the unions’ positions, which all point the same direction politically, do not represent all teachers, 60% of whom identified as either independent or Republican in a 2016 survey.

Nor do they represent all families. Who could forget former NEA General Counsel Bob Chanin’s comment during a farewell address during the 2009 NEA national convention: “It is not because we care about children; and it is not because we have a vision of a great public school for every child,” Chanin boasted. “The NEA and its affiliates are effective advocates because we have power.”

So what can be done to limit union power over education and reject critical race theory?

First, teachers should be aware that they do not have to join a union, nor do they need to in order to receive some of the benefits they seek. For example, the American Board (formerly the American Board for the Certification of Teacher Excellence), is a nonunion professional association that provides alternative teacher certification.

Second, states should open up multiple pathways to the classroom, no longer requiring would-be teachers to enroll in university-based colleges of education to enter the profession. They can begin by eliminating teacher certification requirements, which have no relationship to teacher quality.

Third, states should require school districts to be transparent about the content taught in their public schools. In the aforementioned survey conducted by Braun, while 63% of parents said that transparency is important, only about one-third of parents said that their children’s school is “very transparent” in conveying its educational philosophy. It should be easy for parents to see what is being taught in their children’s classrooms.

Fourth, states should prohibit schools from putting critical race theory’s discrimination into practice in a way that violates Titles IV of the Civil Rights Act, or in a way that compels speech on the part of teachers or students. Heritage has a model proposal that does just that.

Finally, states must provide families with a choice in where and how their children are educated. States should pursue universal education savings account options for families, funding children directly with their share of K-12 education spending, and allowing them to enroll in a private school of choice or to pay for individual courses, tutors, and curriculum.

The COVID-19 pandemic gave millions of families a window into the content being taught in the virtual classroom. School closures, and now critical race theory ’s implementation, have driven families to make their voices heard at local school board meetings across the country. Recent and past positions of the unions should continue to fuel movement for more student-centered, transparent K-12 education—and reject racial prejudice.