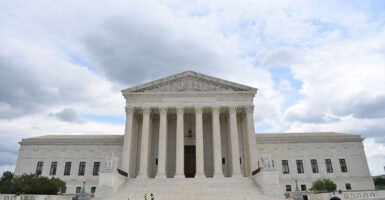 The CDC moratorium exceeded powers delegated to it by Congress, created economic policy through executive fiat, infringed upon the fundamental constitutional right to petition state courts, and infringed upon the sovereignty of states by interfering with the jurisdiction of those courts. (Photo: Mandel Ngan/AFP/Getty Images)

The Supreme Court’s decision to leave in place the Centers for Disease Control and Prevention’s unlawful, unconstitutional eviction moratorium poses a threat to the rule of law, federalism, and fundamental constitutional rights. Justice Brett Kavanaugh perplexingly agreed with the court majority to leave this moratorium in place, despite acknowledging that the CDC’s edict is indeed unlawful.

On Sept. 4, 2020, the CDC banned property owners from commencing the eviction process in courts until the end of 2020. The CDC subsequently renewed and extended this ban three times. Not only did the CDC grossly exceed its congressional mandate, but a congressionally authorized eviction moratorium would itself violate the Constitution.

Examples listed in the Public Health Service Act include: “inspection, fumigation, disinfection, sanitation, pest extermination, destruction of animals or articles found to be so infected or contaminated as to be sources of dangerous infection to human beings, and other measures.”

This eviction moratorium falls far outside the congressionally authorized CDC regulations—and is thus unlawful. As legal scholars at The Heritage Foundation explain:

A basic canon of statutory construction—known as the ‘ejusdem generis’ (Latin for ‘of the same kind’) rule—is that when a broad, vague term follows a list of specifics, that term must refer only to the same sort of things listed before it. Nationwide eviction bans are nothing like the localized, limited actions of inspecting, fumigating, or disinfecting specific buildings or neighborhoods or exterminating pests.

Total relocations in a typical year far exceed the number of evictions experienced even in the depths of the Great Recession at the end of the last decade. Then, the number of evictions failed to top 1 million households annually—or fewer than 2.5 million individuals. In contrast, more than 30 million Americans moved from one location to another in 2019 in a healthy economy.

Even the order itself shows the ban is meant as an economic relief measure, not a tool to protect the public from the spread of disease. For instance, the moratorium excludes people not in poverty or otherwise able to pay their rent. If preventing the spread of communicable disease were the goal, the CDC would hardly focus only on the small fraction of total annual relocations stemming from evictions.

Both the eviction moratorium itself and the CDC’s economic intent unlawfully breach any congressional authorization.

Even if Congress had authorized the CDC to enact an eviction moratorium, the moratoria are unconstitutional. Congress may only delegate to the executive branch the powers granted to it by the Constitution. The commerce clause—upon which the CDC powers are based—does not provide a basis for Congress to prohibit citizens from seeking legal recourse in state courts for enforcement of rental contract provisions.

Our Constitution diminished the dangers of centralized power by reserving that the sovereign states retain all powers except those expressly delegated to the national government under our Constitution. One of the most important powers granted to Congress is the power to regulate interstate commerce (the commerce clause).

Here’s a very basic primer of which types of regulations may be imposed by Congress under the commerce clause.

If the regulated activity is interstate and economic in nature, Congress may regulate the activity. But evictions are inherently intrastate. Furthermore, an eviction order from a court is not an economic product.

On all counts, the CDC moratorium fails to meet constitutional muster—even if Congress did indeed attempt to bequeath such powers on the CDC.

Furthermore, any federal law must be “necessary and proper for carrying into Execution” the powers enumerated to the Congress, as stated in Article 1, Section 8 of the Constitution. Even if the regulation of evictions were a power enumerated to Congress by the Constitution (and it’s not), banning access to state courts or forbidding a state court from exercising its constitutional jurisdiction over the protection of private property or contractual rights is not a law that is “proper.”

In fact, such a ban on accessing the court is itself a violation of one’s right under the First Amendment of the U.S. Constitution to “petition the government for a redress of grievances.” This includes the right to request the court to issue an order for eviction. Regardless of the many other problems with the eviction moratorium, the violation of the necessary and proper clause renders it unconstitutional.

The CDC moratorium exceeded powers delegated to it by Congress, created economic policy through executive fiat, infringed upon the fundamental constitutional right to petition state courts, and infringed upon the sovereignty of states by interfering with the jurisdiction of those courts.

We must be vigilant against attempts to use this crisis as an excuse to further erode private property rights, enlarge federal power beyond constitutional limits, rewrite legislation by executive fiat, or deny fellow citizens their fundamental right to access the courts, enter into enforceable contracts, and to possess private property.

Our system of government, including enumerated powers and separation of powers, requires each branch to stay in its assigned lane. And it demands that the federal government respect the sovereignty of the individual states. The decision by the Supreme Court to permit this unlawful and unconstitutional eviction moratorium to remain intact should concern us all.