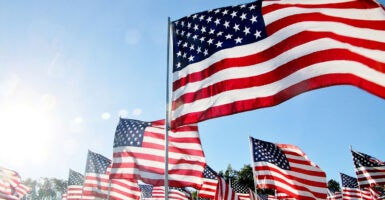 Rob O’Donnell is a former New York City Police Department detective who was involved with the response to, and rescue efforts in, the 1993 World Trade Center bombing, as well as the response to 9/11.

He joins “The Daily Signal Podcast” to talk about the Fourth of July, patriotism, the contempt some show for the American flag, and how he would encourage Americans to embrace patriotism.

“There’s no doubt we are. It falls on dark times lately with all the rhetoric that goes on, but it’s up to the individual citizen of America, the person who lives here, the people who came here to make this their country, to pay into that philosophy that we are a more perfect union and we strive to be a more perfect union.”

Rob O’Donnell: Thank you for having me, Rachel. Glad to be here.

Del Guidice: Well, it’s great to have you with us again on the podcast. I interviewed Rob, I think, back in February or March. And he shared his story, which we’ll link to in the show notes. But today we’re going to talk about the Fourth of July and Independence Day. It’s coming up next week. And since this country will be celebrating Independence Day, Rob, what do you think it means to be patriotic?

It falls on dark times lately with all the rhetoric that goes on, but it’s up to the individual citizen of America, the person who lives here, the people who came here to make this their country, to pay into that philosophy that we are a more perfect union and we strive to be a more perfect union.

We’re going to make mistakes. We’ve made mistakes in the past. And we’ve owned them, and we’ve changed them as we’ve come along with them. And we’re going to change mistakes that we make in the future. But it’s each citizen’s duty to strive their best, not just take from this country, but also give back to it.

O’Donnell: My No. 1 encouragement is to get off social media. Go out and view America, see it with your own eyes, see it for yourself, talk to people of different diversities in this country that have done their part to make this the greatest country in the world. And go see it and experience these experiences that we have across this nation.

Del Guidice: Well, we’ve seen in this past year a lot of attacks on law enforcement. We’ve seen, as we talked about in the past, Rob, the defunding of police in different cities across the country. As someone who has served this country in a few of her darkest hours, for sure, given your service on 9/11, what would you say to the people about the importance of law enforcement and all they do for us as we celebrate this country?

O’Donnell: Law enforcement is not a perfect profession. I will be the first to admit that. But we do our best, and I would hold our track record up against any other profession in this nation.

As far as defunding the police, I think we’re seeing real-time test cases across this nation in cities like Baltimore and Chicago and New Orleans and St. Louis and New York and Philadelphia on what defunding the police does to these cities, to the rise in crime, the percentage in shootings and homicides and just danger for the everyday citizen.

And if we’re not going to learn from these immediate reactions to their actions of defunding the police, then we’re in for a sad future and a sad couple of years.

Del Guidice: As we talk about the Fourth of July and patriotism, something that recently happened in the news, I think, to a degree, illustrates where we’re at in this country when it comes to how people feel about it.

There’s an Olympic contender, Gwen Berry, who, when the national anthem was played during a competition, she turned her back to the American flag and held up a T-shirt that said, “Activist athlete.” She’s competing for a spot to support our country. And she may be in the Olympics representing the United States.

What is your perspective on this and the attitude that we’re seeing more prevalent in today’s day and age, where people openly show contempt for a country that they’re representing to the rest of the world?

I think it’s quite hypocritical on her part to use the platform of representing the USA for her personal agenda to be an activist.

Your position as Team USA members, as a USA Olympian is to represent your nation and be the best person you can be for your country on the world stage. And she’s totally failed at that aspect, so I 100% support her right to protest, but if that’s the way she truly feels, she shouldn’t be representing Team USA at the Olympics.

Del Guidice: Rob, you’ve talked about this on the podcast before, but for anyone who missed that episode when you were on, you were involved in response and rescue to the ’93 World Trade Center bombing as well as the response and recovery on September 11th. Can you tell us about what that experience was like for listeners who may have missed getting to hear you talk about that?

I saw the way we responded to that, how we responded that day, how everyday citizens, our first responders, the firemen, the police, your medics, your everyday doctors that went down there to try and help. That was the very best in American.

And after 9/11, how we came together as a nation, how we embraced our neighbors, how we were afraid and decided that we had more in common than we did that drove us apart. And that was the beautiful thing out of that that I like to remember now that we’re coming on the 20th anniversary.

Del Guidice: Since we are coming to the 20th anniversary, and given the fact that you were there on that day and you saw, as you mentioned, the best and the worst at the same time, what is your perspective on the current climate of patriotism in the United States, as someone who was there on 9/11, has that as their filter, and then sees some of the things that, as you mentioned, we see on the nightly newscast and other things? As someone who’s experienced that, what would be your admonition or your perspective on just the current climate of patriotism right now in this country?

So that’s my perspective of the future patriotism of this nation. There are young men and women out there that love this country and want to serve it and give back to the nation before they go out and take what this country has to offer them.

Del Guidice: That’s beautiful. Thank you for sharing that, and thank you to them for their service. On a somewhat different note, before we end, we’re going to end with the Fourth of July, but I wanted to talk about the Fourth of July in terms of summer season in crime. … The summer tends to be a time where there is an increase in crime in big cities. What is your perspective on what you’ve seen 2021 be like so far?

O’Donnell: I don’t think we’ve yet hit rock bottom in these cities. And I think that’s what it takes.

The crime is increasing exponentially. These cities are dangerous now. You see the crime every day on the news for these cities. And until it gets as bad as it can get before enough people say, “Enough’s enough,” it’s not going to change. And these cities are going to remain a danger for the everyday citizen that just wants to live their life.

Del Guidice: Well, as we wrap-up here, and as many families will be eating together across the country to celebrate the Fourth of July, people will be in our nation’s capital watching the fireworks or anywhere else in any of the cities across this country, what do you think should be top of mind for all Americans as we celebrate July Fourth this year?

O’Donnell: What the Fourth of July stands for, our independence as a nation to make us a more perfect union. Get out there, do your part to make America a more perfect union. Correct what you don’t know about this nation. Learn our nation’s history. Take one day, that day to learn one thing about our nation that you didn’t know and teach it to your family, let them teach it.

Del Guidice: Rob, that’s a great note to end on. Thank you for joining us once again on “The Daily Signal Podcast.” It’s always great having you with us.

O’Donnell: Thank you, Rachel. Thanks for having me. Happy Fourth of July.