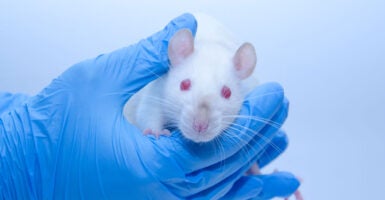 A team of Chinese scientists published a study in which they parabiotically joined a male and female rat, then gave the male rat a uterus and attempted to have it carry embryos to term. (Photo: Olena Kurashova/Getty Images)

Recently, a team of Chinese scientists published a study in which they parabiotically joined a male and female rat, then gave the male rat a uterus and attempted to have it carry embryos to term. Hopefully, this has at least given you pause.

Arina Grossu, director of the Center for Human Dignity at the Family Research Council, correctly describes these experiments on rats as “Frankenscience.” It’s our moral duty to draw the line. This is something the Chan Zuckerberg Initiative certainly wasn’t willing to do, as it endorsed the study.

Why on Earth would scientists be doing this? Can any helpful scientific advancement be achieved through this experiment? One possible answer: It is a vast overstep of scientific curiosity. As Jeff Goldblum said in “Jurassic Park,” “Scientists were so preoccupied with whether or not they could that they didn’t stop to think if they should.”

If this experiment was done simply because they could, it is a very bleak sign. The scientific community sees moral objections to mutilation as an obstacle to be overcome, not a parameter to stay within.

Sadly, the motivations may be even darker. This experiment is a direct step toward the maiming of human males so they are able to carry children. There is no other logical reasoning for why such a study would be undertaken other than to eventually be developed for use on humans. It is common for experimental surgical treatments to be practiced on rodents before humans.

The ramifications for this would be extreme. Would the development of such a procedure lead to doctors being encouraged to implant uteri into biological males who identify as females so they are able to gestate children? This is just one of many questions that could and should be asked about this study and where they hope for it to lead.

Currently, the science seems to be very far off from impregnating human males. But more importantly, should we even be trying to do this?

In short, absolutely not. It is unethical to mutilate men and women’s bodies to try and force them to do something they were never designed to do. We cannot go down this road that has the potential to harm future generations.

Transgender medicine, particularly in children, is already a highly contentious issue that has been rapidly disseminated by the radical left as the only option. It isn’t. And this experiment shows it has no plan of slowing down. In fact, the left is eager to make this happen. It even goes so far as to say equitable access to uterine transplants for transwomen is a “moral imperative.”

Surgically combining two rats in an attempt to impregnate a male does not advance humanity. Pseudo-science like this corrodes ethical principles and throws more skepticism at what is considered morally acceptable. These kinds of research projects should never be allowed to take place in our country or be funded by American tax dollars.