‘People Are Scared To Go Into These Stores’: Shoplifting Is Plaguing Residents, Stores in San Francisco 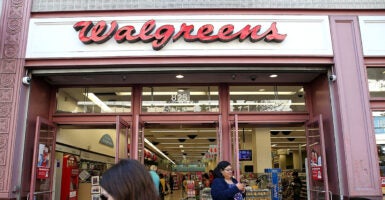 Representatives from Walgreens say that it had closed 17 stores in the Bay Area due to increased shoplifting, and that incidents occurred in its San Francisco stores at a rate four times higher than its national average. Pictured: Pedestrians walk by a Walgreens store on April 5, 2016, in San Francisco. (Photo: Justin Sullivan/Getty Images)

Shoplifters are targeting stores across San Francisco at higher rates, officials say, with thieves frequently stealing in front of security and the onlookers filming them before casually walking out with their items.

One video captured June 14 by a local Bay Area reporter showed a shoplifter in a local Walgreens putting stolen goods in a black garbage bag, even as a security guard and two onlookers record while standing in the same aisle. Another video from October shows a shoplifter jumping over a Walgreens counter to steal an air mattress, before leisurely scootering out of the store as bystanders watch.

Many retail executives, police officers, and city officials have attributed the surge to Proposition 47, a 2014 ballot measure that reclassified nonviolent larceny as a misdemeanor so long as the value of the goods stolen was less than $950.

During a virtual board of supervisors hearing in May, representatives for some of the nation’s largest drugstore chains stressed how bad the increase in shoplifting has become. Representatives from Walgreens said that it had closed 17 stores in the area due to increased shoplifting, and that incidents occurred in its San Francisco stores at a rate four times higher than its national average.

Brendan Dugan, who leads the retail crime division at CVS Health, said the California city was “one of the epicenters of organized retail crime” and that CVS employees were instructed to not pursue thieves for their own safety.

“We’ve had incidents where our security officers are assaulted on a pretty regular basis in San Francisco,” Dugan said during the hearing.

Ahsha Safai, one of the board’s members, said San Francisco’s shoplifting situation was “out of control” during the hearing.

“People are scared to go into these stores: seniors, people with disabilities, children,” he said. “And it’s happening brazenly. We can’t just as a city throw up our hands and say this is OK.”

Commander Raj Vaswani, who leads the San Francisco Police Department’s Investigations Bureau, said that the jump in shoplifting is also leading to higher rates of violence as a result.

“The one trend we are seeing is more violence and escalating—and much more bold,” he said. “We see a lot of repeat offenders.”

Additionally, just 2.8% of larceny crimes this year have been solved, according to San Francisco Police Department data, even as it shows overall crime decreasing in the city compared to the same period last year. Larceny crimes since March, when Walgreens announced numerous store closings in the Bay Area, are up nearly 22% compared to last year as well.

San Francisco Mayor London Breed told CNN affiliate KGO that “some of the Walgreens and CVSes sadly have been hit hard,” and called for more police officers to combat the problem.

“Ultimately, we do need more police officers,” she said. “Not because we’re trying to have a significant force, it’s more so because we have people retiring or leaving. And it’s important to make sure that we have the sufficient staff to walk the beat.”

“All the things that are constantly asked of us from people in communities that they want police officers, they want them out there walking the beat,” she added. “That’s how you get to know the residents that you serve.”

Representatives for Walgreens and CVS did not immediately respond to interview requests.