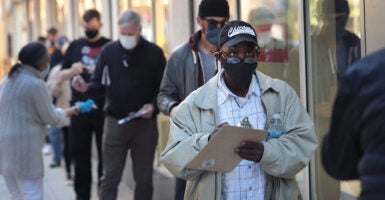 Residents wait in line to vote at an early voting site on Oct. 2, 2020, in Chicago. (Photo: Scott Olson/Getty Images)

That’s what makes Gov. J.B. Pritzker’s endorsement of, and signature on, Illinois’ recent election bill so inexplicable. He said that “Illinois is proud to stand up for a strong, secure, and accessible democracy.” Nice words, if they were true.

To be fair, there are some unobjectionable aspects to the bill, as reported by the Chicago Tribune, such as requiring “the state’s 108 election authorities—primarily county clerks and boards of election—to conduct monthly vulnerability risk scanning.” Although what exactly that entails remains to be seen.

Then there are other oddities, like allowing sheriffs to set up polling places in their jails. These are supposed to be only for people who are awaiting trial and who have not yet been convicted. But sheriffs are not election officials. Are they really going to differentiate between prisoners who are still allowed to vote and those who aren’t?

Even more troubling, some of the bill’s most prominent features would make elections less secure and fly in the face of best practices. For instance, it would establish a new registry allowing people to permanently vote by mail.

Election fraud is difficult to detect and even harder to prove. For these very reasons, prosecutors often aren’t interested in pursuing it even when it does occur.

Absentee voting is particularly vulnerable to abuse, as shown by the many, proven cases involving absentee ballots—the tool of choice of vote thieves—in The Heritage Foundation’s Election Fraud Database, which contains a sampling of cases from across the country, including Illinois. Because of this, absentee voting should generally be limited to those who are too disabled to vote in person or who will be out of town on Election Day and all early voting days.

After every federal election, the U.S. Election Assistance Commission files a report with Congress on each state’s performance in the election. One of the areas the report covers is absentee balloting. The reports on the 2012, 2014, 2016, and 2018 elections detail that Illinois election officials mailed out hundreds of thousands of absentee ballots.

Yet, in contrast to other states, Illinois refused to provide the Election Assistance Commission with any information on how many of those absentee ballots were returned as undeliverable by the U.S. Postal Service, which would give a measure of just how accurate and up to date (or inaccurate and out of date, as the case may be) its voter registration lists are.

The only two possible reasons for not providing that data: The state’s record-keeping is so poor that it can’t provide the data, or election officials are too embarrassed to provide the data because of the problems it would show with their maintenance of the state’s voter registration list. Neither possibility gives one any confidence in the state’s election system.

Basic safeguards, such as requiring a photo ID in order to vote—especially by absentee ballot—should be required. It appears even some Democratic lawmakers are abandoning their long-held oppositions to voter ID, which makes sense given the overwhelming support for such a commonsense measure by voters of all races and political views. A 2005 bipartisan commission chaired by former President Jimmy Carter and former Secretary of State James Baker urged states to adopt this safeguard.

Unfortunately, Illinois has not yet done so, allowing a major vulnerability in its voting and election process to stay in place.

And the state has yet to enact other commonsense election safeguards, such as prohibiting vote trafficking or verifying the citizenship of voters.

Vote trafficking—allowing third-party strangers to pick up and deliver absentee ballots—puts voters at risk of being pressured, intimidated, and coerced in their homes by candidates, campaign staffers, party activists, and political consultants to vote for the candidate that they prefer, not the candidate that the voter prefers. And putting ballots in the hands of such individuals who have a stake in the outcome of the election is an unwise, reckless policy. That is why so many other states other than Illinois have banned the practice.

Until Illinois legislators pass these sensible measures, elections in that state will be anything but strong and secure. Pritzker should take a page from Florida Gov. Ron DeSantis’ playbook and back immensely popular, meaningful election reform. After all, Pritzker’s family apparently already enjoys spending substantial time in that state.

Originally published by the Chicago Tribune