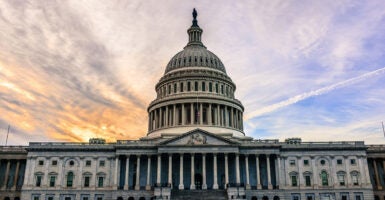 The House is voting on the Invest in America Act, which Rep. Ted Budd’s office says includes 1,473 earmarks. Together, those earmarks total $5.66 billion. (Photo: mbell/Getty Images)

A North Carolina congressman is introducing an amendment to remove all earmarks from a transportation spending bill slated for a House vote this week.

“Taxpayers across the country are getting their first look at what Washington is like in the new earmark era,” Rep. Ted Budd, R-N.C., said in a statement to The Daily Signal.

“It’s not a pretty sight,” Budd said. “This transportation spending bill includes 1,474 examples of the Washington swamp saying they know best when it comes to spending taxpayer dollars. If an earmarked project is truly worthy of taxpayer funding, then it should be proposed individually on the House floor or as a competitive grant.”

The House is voting on the Invest in America Act, which Budd’s office says includes 1,473 earmarks. Together, those earmarks total $5.66 billion.

According to Budd’s office, “dozens of these earmarks have to do with Green New Deal priorities like greenways, electric vehicles, etc.”

Conservatives long have opposed earmarks, which direct taxpayer money to lawmakers’ special interests and projects through the budget. Lawmakers banned earmarks under House rules in 2010, but House Democrats voted to bring earmarks back in February.

In March, the North Carolina congressman led a coalition of 10 senators and 25 House members to send a letter to the House and Senate Appropriations Committee chairs voicing their “strong opposition to the formal return of pork-barrel earmarks.”

“Every taxpayer dollar is sacred and should be treated that way,” Budd said. “If this Congress really believed that, then we should remove this pork-barrel spending.”