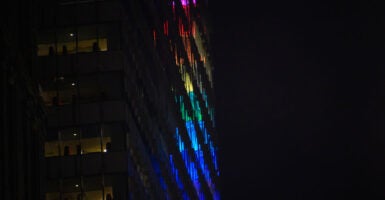 Reporting requirements serve as a next step in bringing quotas to the credit markets, which will ironically enshrine discrimination in the marketplace rather than prevent it. Pictured: The Bank of America Tower in New York City adorned with rainbow lights for Pride Month on June 27, 2020. (Photo: Noam Galai/Contributor/Getty Images)

No one should be denied credit because of their sexual orientation or gender identity.

Ostensibly to deter such discrimination, a proposal in Congress (HR 1443) would require small-business lenders to furnish data to the federal Consumer Financial Protection Bureau detailing the LGBTQ business ownership status of credit applicants.

That mirrors current law imposing similar reporting on female or minority business ownership. But regardless of the supposed intent of the bill’s proponents, reporting requirements serve as a next step in bringing quotas to the credit markets.

Ironically, such quotas enshrine discrimination by making success in the marketplace partially contingent on membership in a politically favored category. That conflicts with the American ideal of equality under the law and equal protection of the law.

Of course, if unlawful discrimination occurs, the government should enforce the law—and private parties should have the right to sue in court.

However, such discrimination would be rare within the financial services sector even without legal protections in place. For a financial institution, shareholder value is maximized by lending capital to those businesses that are best equipped to meet the demands of the marketplace by efficiently combining capital, ingenuity, and labor—irrespective of irrelevant category distinctions.

Discrimination on the basis of race, sex, gender, or sexual orientation places the firm at a disadvantage to competitors who determine creditworthiness based on relevant factors.

Unlike the mistreatment of racial minorities under Jim Crow (racial discrimination mandated by the law), little evidence exists either of market or cultural forces that are creating discrimination in credit against businesses because of business owners’ sexual orientation or gender identity.

In fact, businesses that celebrate the LGBTQ community are thriving economically. According to the National Gay and Lesbian Chamber of Commerce, the 1.4 million LGBTQ businesses in the United States contribute more than $1.7 trillion to our economy. That demonstrates that market forces support values of the LGBTQ community.

Many major companies, from Amazon to Chipotle to Disney, as well as financial institutions such as TD Ameritrade, PNC, Wells Fargo, and Bank of America are celebrating Gay Pride Month with special events, products, and messages.

The real agenda of HR 1443 is shifting the purpose of business from maximizing shareholder value to accomplishing the designs of a few social elite. Category-based quotas—whether for credit allocation, academic admissions, or corporate leadership—shift the basis of success from individual merit to category membership.

Reporting requirements on the category distinctions of credit applicants move us closer to the establishment of quotas across the financial sector.

Nasdaq, for instance, is already pursuing diversity quotas combined with reporting requirements for the board memberships of listed companies. Such quotas are discriminatory, immoral, and have no basis in economics.

This proposed reporting requirement is a solution to a problem—systemic credit discrimination based on sexual orientation and gender identity—that does not exist.

Instead, this is another step in the quest to impose discriminatory credit quotas or preferences based on category distinctions.

That embrace of identity politics and classism runs contrary to American values of equality under the law. It also imposes yet one more cost to small-business lending that will raise the cost of borrowing and make bank lending to small businesses less economically attractive.

Congress should instead ensure that the Small Business Administration is focused on its congressionally mandated mission—namely, to “aid, counsel, assist and protect the interests of small-business concerns, to preserve free competitive enterprise, and to maintain and strengthen the overall economy of our nation.”