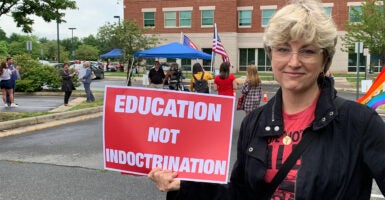 Cathy Ruse takes part in a rally of parents and community members opposed to the Loudoun County School Board's proposed transgender policy and to the teaching of critical race theory prior to Tuesday’s school board meeting. (Photo: Virginia Allen/The Daily Signal)

A school board meeting in Loudoun County, Virginia, scheduled to discuss a proposed transgender policy, came to an abrupt halt Tuesday evening after the board ended public comment and proceeded to leave the room.

The board moved to end public comments after the crowd of several hundred erupted into cheers following critical remarks by former state Sen. Dick Black.

“It’s absurd and immoral for teachers to call boys ‘girls’ and girls ‘boys,’” Black said, referring to the school board’s proposed transgender policy, which would require educators to call students by their “preferred” pronouns and name.

Black, 77, represented parts of both Loudoun and Prince William counties in the state Senate from 2012 to 2020, before retiring to spend more time with his family.

The school board there came under increased scrutiny after physical education teacher Byron “Tanner” Cross was suspended for saying he would not abide by the school system’s proposed transgender policy, citing his religious beliefs.

During Tuesday evening’s meeting, public comments centered on critical race theory and the school board’s proposed “Policy 8040,” or the “Rights of Transgender and Gender-Expansive Students.” If passed, the transgender policy would allow students to use restrooms and locker rooms based on their “asserted gender identity.” The policy also would require school staff to allow students to participate on athletic teams that are “consistent with the student’s gender identity.”

Parents and community members voiced their opinions for and against Policy 8040 and the teaching of critical race theory for about an hour before comments were ended. Each speaker was given 60 seconds to deliver their remarks.

About 15 minutes into the public comments portion of the meeting, the crowd erupted after a woman said “hate” was “dripping from the followers of Jesus in this room.” The nine-member school board adjourned for five minutes and returned to announce that another noisy interruption would result in the end of public comments.

“We ask again that you respect each other, and everyone is allowed to speak,” board Chairwoman Brenda Sheridan said.

About 45 minutes later, the crowd again erupted, but this time in support of Black’s remarks opposing the district’s proposed transgender policy and critical race theory. Board members promptly voted 9-0 to end public comment and proceeded to leave the room.

Moments after the board members left, the crowd began to chant “Shame on you!” Since many individuals had not yet had a chance to express their opinions, members of the crowd organized themselves and continued delivering their remarks for about 15 minutes before officials declared the gathering an unlawful assembly and moved the crowd out of the building. Parents continued to make remarks outside using a portable speaker and microphone.

Two attendees were arrested after the formal meeting concluded. One man was arrested for refusing to leave the meeting room after the gathering was declared an unlawful assembly. He was later released, according to a Fox News report.

Another man was arrested for “acting disorderly and displayed aggressive behavior towards another attendee,” a Loudoun County Sheriff’s Office spokesperson told Fox News.

About 250 individuals were slated to speak during the meeting, but only 51 got to deliver comments before board members left the room.

Daniel Brubaker, a father of three, was one of the individuals who did have an opportunity to address the board.

“I’ve noticed a pattern,” Brubaker, 50, said to the school board members. “You treat your bosses—all of us—like children. You treat the woke mob—your employees and teachers unions—like your bosses. And you treat children who have not harmed you like pawns in your leftist social experiment.”

Two of Brubaker’s children have graduated from Loudoun County Public Schools, and the third is a rising 10th grader. The Daily Signal spoke with Brubaker after the meeting regarding the school system’s proposed transgender policy.

“Of course, you want everybody to be treated respectfully and to feel safe and so forth, and to my understanding, the policies already require that for everybody in the schools,” Brubaker said, adding:

The school system’s proposed transgender policy gained significant attention a few weeks ago after Leesburg Elementary School teacher Cross spoke out against it at a public meeting May 25. Cross said he could not comply with the transgender policy, citing his faith, and explained that he refused to lie to his students about their gender.

Many parents and community members urged the school board to drop its case against Cross at Tuesday’s meeting before public comments were ended. Some even wore T-shirts and held signs saying “Let Tanner Teach.”

“The [Loudoun County] School Board has numerous times shown themselves to be feckless, and I think they exemplified that tonight in the fact that they left the room [and] would not continue the public comment,” Tiffany Polifko, 39, told The Daily Signal after the meeting.

Polifko is the mother of a rising fifth grader and an eighth grader in Loudoun County Public Schools. In March, she became concerned about what her middle-school son was being taught when he was given an English assignment related to critical race theory.

The assignment included watching a “Ted Talk” delivered by a woman who told the audience “they were oppressors, that we needed to deconstruct the system, that we had to acknowledge our privilege, and my son was uncomfortable,” Polifko said. “He did not understand what he was being asked to do.”

Polifko says she thinks the school board members ended the public comments early because they “knew that they were wrong.”

The Daily Signal reached out to the Loudoun County School Board seeking comment on Tuesday’s meeting. Wayde B. Byard, the county’s public information officer, responded with a prepared statement:

The Loudoun County School Board ended the public comment section of its June 22 meeting on a unanimous vote after Chair Brenda L. Sheridan repeatedly warned the attendees in the Board Room that loud public demonstrations violated the decorum of the meeting.

Sheridan had previously, and repeatedly, warned the public after introducing the public comment section with a reading of School Board Policy 2520. Earlier, the chair recessed the School Board meeting for five minutes due to disruptions before the unanimous vote to end public comment was taken. At 6:30 p.m., the business portion of the meeting resumed.

The school board did not vote on Policy 8040 on Tuesday night, and is not expected to vote on it until Aug. 10.

Two mothers of young special-needs children expressed their concerns regarding the transgender policy to The Daily Signal before the meeting.

Dana Laukhuf, 39, is the mother of a pre-K special-needs daughter who is currently nonverbal. Laukhuf says that if Policy 8040 passes, she will demand that someone always accompany her daughter to the restroom because she knows her daughter would not be able to defend herself against someone who “chooses to be a female that day.”

Aimee Miller, 50, is the mother of a 7-year-old daughter with Down syndrome. Like Laukhuf, Miller is concerned that her daughter’s safety in the restroom would be at risk if Policy 8040 were passed.

On Monday, Kara Dansky, steering committee member of the U.S. chapter of the Women’s Human Rights Campaign, and Lierre Keith, chair of the Women’s Liberation Front, sent a letter to the Loudoun County School Board warning its members of the dangers of the transgender policy.

“We are the two leading radical feminist activist organizations operating in the United States,” Dansky and Keith wrote. “Our understanding is that the board is poised to obliterate single-sex spaces in schools throughout Loudoun County, Virginia. If this is correct, we are appalled and disgusted at the direction in which the county is headed.”

The feminists added that “[g]irls deserve privacy from boys, including boys who claim to ‘identify as girls.’ So-called ‘gender identity’ is a regressive movement to sanctify the destruction of everything that feminists have fought for.”

Parents and community members vowed Tuesday to keep up the pressure on the Loudoun County School Board members. “They are going to face us again in the fall when their meetings start up again,” Black told The Daily Signal, adding that he is optimistic that “the pressure is just becoming unbearable on the school board.”