San Francisco Is Most Racist City in America, According to Critical Race Theory 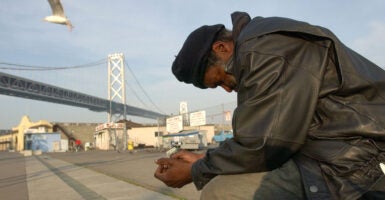 Despite being touted as the most progressive city in the nation, San Francisco’s urban renewal policies in the 1990s in effect forced out the African American population. Pictured: Maceo Grigsby, a homeless man, sits by the waterfront with the San Francisco Bay Bridge in the background. (Photo: Justin Sullivan/Getty Images)

San Francisco may have a well-earned reputation as the most progressive city in the nation. Speaker of the House Nancy Pelosi, D-Calif., has represented the City by the Bay for more than 30 years. But viewed through the lens of critical race theory, it is also one of the most racist cities in the country.

Critical race theory is a radically different way of understanding our nation’s past and present. According to “Critical Race Theory: The Key Writings That Formed the Movement”—edited by Columbia Law School professor Kimberle Crenshaw, who first coined the terms “critical race theory” and “intersectionality”—critical race theory seeks to “understand how a regime of white supremacy and its subordination of people of color have been created and maintained in America.”

Critical race theory explicitly rejects the ideal of colorblindness in American society and the traditions of integration and assimilation. Instead, according to Crenshaw’s book, critical race theory seeks to “recover and revitalize the radical tradition of race-consciousness among African Americans and other peoples of color.”

Critical race theory also rejects the definition of “racism” as just something an individual “wrongdoer” does. Instead, according to Crenshaw’s book, critical race theorists look at “the sum total of the pervasive ways in which law shapes and is shaped by race relations across the social plane.” Laws produce racist outcomes not just through explicitly racist policies, but more commonly “through myriad legal rules, many of them having nothing to do with rules against discrimination.”

So, for example, critical race theorists often argue that when the Home Owners’ Loan Corporation of the 1930s rated minority neighborhoods as financially risky, by coloring them red on the maps they produced (hence the term “redlining”), it made it harder for black families to buy homes and begin to build wealth.

Even though this practice was outlawed 50 years ago, critical race theorists claim it is still a major cause of the wealth gap between white and black families today.

“Critical race theory is a practice,” Crenshaw recently told CNN. “It’s an approach to grappling with a history of white supremacy that rejects the belief that what’s in the past is in the past, and that the laws and systems that grow from that past are detached from it.”

Turning our attention back to San Francisco, the city did not have much of a black community when the Home Owners’ Loan Corporation was rating neighborhoods. Before Pearl Harbor, less than 1% of San Francisco’s population was black. By 1950, however, that number had grown to 5.6% and it almost doubled to 10% in 1960, before leveling off at about 13% in 1970 and 1980.

“There was a viable, wonderful African American population in every way,” former San Francisco Mayor Willie Brown told KTVU. “We had three hotels in the Fillmore. We had, probably, 15 to 20 bars, with music facilities in them.”

Other cities have lost some black residents, too (and others have gained them). But of the top 20 largest cities in the nation, San Francisco is now near the bottom in black population.

New York and Dallas are both 24% black. Philadelphia and Washington are 42% and 46% black, respectively. Only San Jose has a lower percentage of black people than San Francisco, at just 3%, but San Jose never had a large black community. The share of black residents in San Jose never reached 5%.

Only in San Francisco did a black community grow so large only to just recently be forced out.

If the Democratic Party and the critical race theory movement want the rest of America to address historical racism and current racial inequality, they really ought to look in the mirror and ask why their shining jewel of progressive governance, Pelosi’s own San Francisco, has proved to be such a hard place for black people to thrive today.