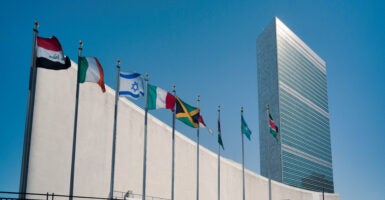 Negotiations at the United Nations on a “political declaration” on HIV/AIDS ended in controversy last week as nations clashed over a “human rights” approach to preventing spread of the AIDS virus.

Championed by UNAIDS, the U.N. entity tasked with combating the HIV/AIDS pandemic, this rights-based approach prioritizes the advancement of controversial sexual “rights” at the expense of sexual health.

In the context of the HIV/AIDS pandemic, that can literally cost lives.

Throughout negotiations during the U.N.’s high-level meeting on HIV/AIDS, Western donor countries joined with UNAIDS to pressure developing countries to accept provisions calling for those nations to decriminalize and destigmatize the very behaviors that put people at the highest risk of transmitting the HIV, the virus that causes AIDS, including “sex workers,” “men who have sex with men,” “people who inject drugs,” and “transgender people.”

If any of that is shocking and appalling, it helps if you understand that a key UNAIDS partner is the International Planned Parenthood Federation, the world’s largest provider of comprehensive sexuality education.

That raises another point of contention in the negotiations—the many references calling for “sexual and reproductive health” and “services” and “reproductive rights,” terms used as euphemisms to advance abortion, comprehensive sex education, and even cross-sex transgender hormones and surgeries.

And yes, the federation is one of the largest providers of abortion worldwide and is now even a provider of transgender hormones.

Further, the draft declaration called for governments to consider “removing structural barriers, such as parental consent … for sexual and reproductive health care services,” which would give the International Planned Parenthood Federation, with its 65,000 service sites in 172 countries, access to minors more easily.

Moreover, the declaration called for reformation of “restrictive” frameworks “such as age-of-consent laws and laws related to HIV nondisclosure.” The former would promote the repeal of laws meant to protect minors from medical and sexual predation; the latter would push the repeal of laws requiring people diagnosed as HIV-positive to inform their sexual partner(s) that they are infected with this highly contagious and potentially deadly disease.

Repealing HIV-disclosure laws has long been a goal of the International Planned Parenthood Federation. For example, its “Healthy, Happy, and Hot” publication for HIV-positive youths states: “Some countries have laws that say people living with HIV must tell their sexual partner(s) about their status before having sex … . These laws violate the rights of people living with HIV … .”

Planned Parenthood also now markets and dispenses expensive HIV-prevention drugs called PrEP in the U.S. and in Africa, telling youths not to worry about getting infected, since PrEP will eliminate that risk. Never mind the 10% failure rate, teen user error, and the potential for serious side effects.

In fact, it would seem that the bulk of the HIV declaration was a marketing piece for International Planned Parenthood Federation’s many “sexual and reproductive health services.”

Thankfully, some U.N. member nations repeatedly objected to those controversial provisions. Yet, despite these objections, numerous controversial provisions, including the reference to “sexuality” education and the call for the removal of parental consent remained when the text was placed under a 24-hour U.N. “silence procedure.” Under that procedure, nations are under considerable pressure not to “break the silence” to contest anything in the proposed draft.

But “break the silence” a number of nations did, expressly to defend parental rights and to protect children from U.N.-style comprehensive sexuality education. A group of countries challenged those provisions, and fortunately, both harmful references were removed from the final draft.

But many other highly contested provisions remained in the declaration’s text, which was then presented to the U.N. General Assembly for adoption. That angered a number of nations, but only Russia acted by proposing three amendments to be voted on—a move strongly denounced by donor countries, as it meant the HIV declaration would not be adopted by consensus, rendering it a much weaker U.N. document.

Regrettably, Russia’s amendments were soundly voted down. Its first amendment was supported by just 12 other countries; the second by only two; and the third by four countries. So, Russia then called for a vote to reject the entire declaration. That bold move was supported only by the delegations of Belarus, Nicaragua, and Syria.

Since countries opposed to the remaining controversial provisions were under intense political pressure to accept them or else potentially lose millions of dollars in HIV/AIDS funding, the overwhelming majority of U.N. member states voted to adopt the declaration.

Still, many nations immediately afterward expressed reservations or disassociated themselves from various paragraphs in the text, thereby further weakening the declaration.

In the end, however, the controversial sexual rights approach to fighting HIV/AIDS prevailed at the U.N., and the final declaration contains many harmful provisions.

Although nonbinding on member nations, the declaration is binding on the U.N. system and therefore will direct the spending of billions of dollars in HIV/AIDS funding over the next five years.

Regrettably, only time will tell how many more lives might be harmed or lost as a result.