The Myth of Republican Obstructionism 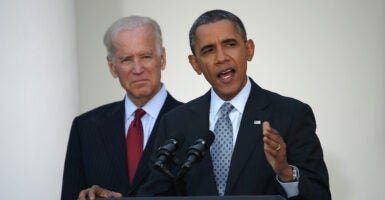 While it's true that not a single Republican supported President Barack Obama's 2010 "national health care plan," it's also true that not a single Democrat has voted for any of the dozens of bills to repeal "Obamacare." Pictured: Obama, with then Vice President Joe Biden, speaks on the Affordable Care Act in the Rose Garden of the White House April 1, 2014. (Photo: Win McNamee/Getty Images)

The political media have spent the entire Joe Biden presidency up to this point pressuring holdout moderate Democrats to join the left’s efforts to destroy the legislative filibuster. One way they do this is by cobbling together revisionist histories that cast Republicans as uniquely obstructionist and undemocratic.

What he fails to mention is that after President Bill Clinton’s “deficit-reduction” bill, the GOP, often in significant numbers, voted for a slew of big policy reforms: 16 Senate Republicans voted for the Family and Medical Leave Act; a telecommunications reform passed 81-18, with only one Republican voting nay; the welfare-reform compromise bill passed 78-21; the Brady Act gun-control bill only passed because of Republican support; the North American Free Trade Agreement passed 73-26; Biden’s crime bill passed 95-4; just to mention a few.

Of course, in those days, parties would bend over backward to compromise when writing wide-ranging bills so they could claim bipartisan support. This was often the case during the George W. Bush years as well. The Patriot Act was a bipartisan bill. No Child Left Behind, co-written by liberal “lion” Sen. Ted Kennedy, passed 87-10 in the Senate.

It was the passage of the Affordable Care Act in 2010 that frayed the political order in ways from which we haven’t recovered. For the first time in contemporary history, a political party unilaterally crammed through a national reform without any buy-in from half the nation. So, while it’s true that not a single Republican supported President Barack Obama’s 2010 “national health care plan,” it’s also true that not a single Democrat has voted for any of the dozens of bills to repeal “Obamacare.”

Harwood is also right that Biden’s 2021 “covid-relief plan” garnered zero Republican votes. Yet, the CNN correspondent again seems to have forgotten that Democrats filibustered and blocked Republican coronavirus-relief bills dozens of times. You know how many Democrats voted for President Donald Trump’s tax-reform bill? Zero. Democrats filibustered Sen. Tim Scott’s criminal-justice reform bill. They used the filibuster to block funding of Trump’s border wall. They blocked Sen. Ben Sasse’s Born-Alive Abortion Survivors Protection Act — a bill that did not restrict abortion but merely compelled doctors to try to save babies who survived them.

Perhaps Harwood is unaware that Trump faced more procedural delays in his four years in office than any president in history — actually, more than all other presidents in history combined. According to a Politico analysis, Bill Clinton faced a total of 15 filibusters by the Senate in his two terms. Obama faced 175 in eight years. Trump faced over 300 in only four.

I’ve noticed that many liberals attempt to circumvent this prickly reality by pre-writing history: “Is there any doubt that the GOP would end the filibuster for good — in a heartbeat — if it served their purposes?” asked ABC News senior national correspondent Terry Moran, rhetorically. Indeed, there is great doubt, considering that Trump had publicly pressed Sen. Mitch McConnell to blow up the legislative filibuster on numerous occasions, and the Senate leader refused.

Let’s not forget either that Democrats blew up the judicial filibuster. And when it backfired, and Republicans followed the new rules Sen. Harry Reid had instituted, Democrats tried to redefine judicial confirmations as “packing the Court.” There is a perpetually evolving set of rules, and the constant is that these rules must benefit Democrats.

It was also Democrats, led by Biden, who blew up the norms of decorum and bipartisanship in the Supreme Court confirmation hearings when they politicized the nominations of Robert Bork and Clarence Thomas. Only three Democrats voted to confirm Neil Gorsuch. Only one Democrat — Sen. Joe Manchin — voted to confirm Brett Kavanaugh after Democrats smeared him with their unsubstantiated charges. And not one Democrat voted for Amy Coney Barrett. Five Republicans voted to confirm Elena Kagan, and nine voted to confirm Sonia Sotomayor before Mitch McConnell followed the “Biden rule” on Merrick Garland.

There’s really nothing wrong with inaction in Congress if the country is fundamentally at odds over policy — which is clearly the case these days. The system is built — and political parties exist — to stop each other’s excesses. In that regard, the filibuster has been one of the most effective tools in preserving some semblance of proper constitutional governance.

Now, political parties might be right or wrong, but only one clamors to blow up the rules every time it doesn’t get its way. And just because Harwood seems to be under the impression that the only vote that matters in Washington is one that propels liberal initiatives doesn’t entitle him to rewrite history.