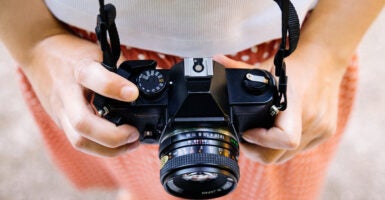 Nebraska’s attorney general has filed an amicus brief on behalf of 14 states in support of religious freedom in the workplace in a case out of New York state.

New York’s public accommodations laws are so restrictive, the lawsuit asserts, that they prohibit a Christian photographer from even explaining on her own website that her religious beliefs inform the ethos of her photography.

The brief, in the case of Emilee Carpenter Photography v. James, filed June 4 in U.S. District Court for the Western District of New York, supports Emilee Carpenter, a  New York-based photographer who is a Christian and refuses to photograph same-sex wedding ceremonies.

To understand why it might be necessary for 14 states (Alabama, Arkansas, Kansas, Kentucky, Louisiana, Mississippi, Missouri, Montana, Oklahoma, South Carolina, Texas, Utah, and West Virginia, along with Nebraska) to offer their support to Carpenter, it’s helpful to get a clear picture of New York’s punitive public accommodations laws.

One of the challenged laws also forbids Carpenter and her business from publicly explaining on her studio’s own website or social media her religious reasons for only celebrating wedding ceremonies between one man and one woman, ADF explained. New York forbids such communications because they could make prospective customers feel “unwelcome, objectionable or not accepted, desired, or solicited.”

If Carpenter were to contradict any of those laws, New York officials could “force her business and her personally to pay limitless damages and a $100,000 fine, require her to create artwork against her beliefs via court order, revoke her business license, and lock her in jail for up to a year.”

According to her lawsuit, Carpenter has declined to respond to several requests to photograph same-sex weddings, and New York has punished other business owners who hold similar religious beliefs. She is a target for what many regard as reverse discrimination, and it’s only a matter of time before she is sued for refusing to photograph a same-sex wedding ceremony.

This is hardly the first case of its kind, however.

Aside from Colorado’s long-running Masterpiece Cakeshop case, in which baker Jack Phillips refused to design a cake for a same-sex wedding ceremony and narrowly won his case several years later at the Supreme Court, “in 2019, the U.S. Court of Appeals for the 8th Circuit and the Arizona Supreme Court ruled in favor of filmmakers and artists, respectively, who brought similar challenges against laws like New York’s,” according to Alliance Defending Freedom attorneys.

The following from the lawsuit sums up the problem well:

As applied to Emilee, though, these laws do not simply dictate what she does; they dictate what she says. Emilee is already willing to work with clients, no matter who they are, including those in the LGBT community.

Public accommodations laws are necessary in a world in which people who can be selfish and biased, but framing laws so as to punish people with orthodox beliefs is a kind of reverse bias that’s unconstitutional.

Furthermore, forcing a business person to live with what is essentially a gag order, compelling them to remain silent about their core beliefs, or face large fines, is antithetical to the Constitution’s core tenets and the importance of free speech and free exercise of one’s beliefs.

The amicus brief from the 14 states explains it this way:

The freedom against compelled speech applies in this case because Carpenter’s custom wedding photographs are her constitutionally protected speech.

Those images—which Carpenter carefully selects, edits, and compiles—tell the story of the wedding day from her perspective, and they do so far better than words can.

Because she speaks through her wedding photography, New York cannot force her to address the topic of same-sex marriage.

As Carpenter’s lawsuit read, “in our diverse and pluralistic country, the solution to disagreement is more speech by diverse speakers, not compelled ideological uniformity by government bureaucrats.”

New York’s public accommodation laws should encourage fair treatment, equality, and offer peace of mind to all, not threaten to muzzle people of faith who live out their religious beliefs in their life and work.