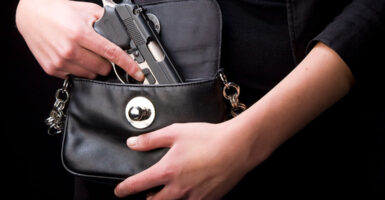 In one incident last month, a woman used her firearm to protect herself and her children when a man broke in and threatened the family with a knife. She shot him dead. (Photo illustration: RichLegg/Getty Imgaes)

Samuel Bock is a member of the Young Leaders Program at The Heritage Foundation.

Whenever criminals harm someone with firearms, many gun control advocates use the violence as an argument to disarm ordinary, peaceable Americans.

Indeed, this is precisely what happened May 23 after two groups opened fire on each other outside a crowded strip club in Austin, Texas, fatally wounding one bystander and injuring 13 others, most of them also bystanders.

Miami Police Chief Art Acevedo, formerly chief in both Austin and Houston, took to social media, where he appeared to mock the idea of ordinary armed civilians being able to intervene effectively when criminal violence occurs.

Never mind that the new, permitless carry statute was not in effect at the time of the shooting outside the Austin strip club.

Never mind that both suspects are minors who, even under the new statute, cannot lawfully carry a handgun in public.

Never mind that the shooting took place during weekend bar- crawl hours in a downtown entertainment district, where most people can’t legally carry firearms because they’ve been drinking alcohol but police officers have an unusually high presence.

To Acevedo, the logical conclusion is that the new Texas law is to blame, and that cops must be immediately on the scene to confront violent criminals.

Unfortunately for the Miami police chief, though, the reality is that, despite their best efforts, police officers rarely are able to arrive fast enough to protect potential victims before they would be able to protect themselves if they were armed.

In fact, the data shows just how important the Second Amendment is during the vast majority of instances when police can’t get to the scene in time.

Almost every major study on the issue has found that Americans use their firearms in self-defense between 500,000 and 3 million times a year, according to a 2013 report by the Centers for Disease Control and Prevention. We have good reason to believe that many of these defensive uses of guns aren’t reported to police, much less make the local or national news.

For this reason, The Daily Signal each month publishes an article highlighting some of the previous month’s many news stories on defensive gun use that you may have missed—or that might not have made it to the national spotlight in the first place. (Read accounts from 2019, 2020, and so far in 2021 here.)

The examples below represent only a small portion of the news stories on defensive gun use that we found in May. You may explore more by using The Heritage Foundation’s interactive Defensive Gun Use Database.

It’s sometimes true that police officers can arrive in time to stop a crime, or that under some circumstances armed civilians are not able to defend themselves or others. But as these news stories show, the number of times that the right to keep and bear arms makes all the difference is far from insignificant.

Rather than doing their utmost to undermine the Second Amendment, gun control advocates such as Miami’s Acevedo should take notice of how ordinary Americans protect themselves every day with lawfully wielded firearms.