The Swiss Say ‘No,’ ‘Nein,’ to Costly Climate Regulations 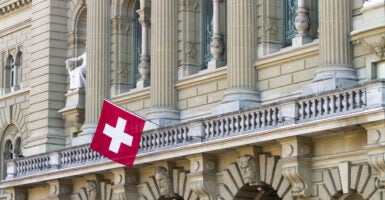 Swiss voters recently rejected several expensive environmental proposals, including a carbon tax, an artificial pesticide ban, and a redirection of subsidies to farmers who no longer use pesticides. Pictured: The facade of the Parliament Building in Bern, Switzerland. (Photo: william87/Getty Images)

Voters in Switzerland, one of the world’s most competitive and free economies, disapproved a revision on Sunday to the Alpine country’s climate law that would have increased taxes on driving and flying.

In the referendum, Swiss voters nixed a trio of expensive environmental proposals, including a carbon tax, an artificial pesticide ban, and a redirection of subsidies to farmers who no longer use pesticides.

“Many [Swiss] voters appear to have worried about the impact on the economy as the country tries to recover from COVID-19,” the BBC reported. “Opponents [of the proposed regulations] also pointed out that Switzerland is responsible for only 0.1% of global emissions, and expressed doubts that such policies would help the environment.”

Indeed, the uneasiness of the Swiss public—clearly reflected in the world’s first-ever carbon dioxide referendum—is more than sensible and valid.

The doubts and concerns are a natural result of any commonsense cost and benefit analysis of the Paris climate agreement’s carbon dioxide emissions limits. They are very likely to be shared by many Americans who are frightened by the tax and regulation-rich plans of the Biden administration’s climate change policy.

Since assuming office, President Joe Biden has proposed a slew of energy and climate change executive actions and commitments. His expansive decisions represent a government makeover—and takeover—of America’s energy and transportation sectors, from a federal land and water moratorium on new oil and gas lease sales (which a federal judge just struck down) to canceling the Keystone XL pipeline.

Equally troublesome is that the Biden administration has made much of its new pledge to the Paris climate agreement, marrying it with trillions in climate spending and regulatory proposals in the American Jobs Plan and complimentary legislation from Congress.

John Kerry, U.S. special presidential envoy for climate, has said several times, “If all the industrial nations went down to zero emissions … it wouldn’t be enough.”

As my colleague at The Heritage Foundation, Katie Tubb, recently pointed out, it’s time for climate realism. A far more productive approach would be to reject climate policies that impoverish Americans for little to no environmental benefit.

Instead, the Biden administration should pursue policies that make the U.S. a more inviting, dynamic, innovative, and competitive country in which to do business, make investments, and export products.

From a broader policy perspective, the right way to ensure a cleaner and healthier environment is through free market principles, which have proven to deliver environmental success. The most remarkable improvements in clean energy use and energy efficiency over the past decades have occurred not as a result of government command and control, but because of advances in economic freedom.

Freer economies—those that uphold the rule of law, limited government, regulatory efficiency, and market openness—ensure a healthier, cleaner environment and achieve greater prosperity, according to Heritage’s 2021 Index of Economic Freedom.

It’s no wonder that Switzerland is one of the world’s top-tier “free” economies.