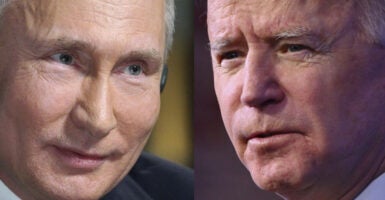 These advocates mistakenly claim that U.S. missile defense causes Russia and China to develop new offensive nuclear systems, and that making concessions on missile defense would halt a supposed arms race between the United States and these two adversaries.

This is a dangerous and misguided assumption.

Under national policy, the United States relies on nuclear deterrence to counter the Russian and Chinese nuclear threats, and deploys its ballistic missile defense system only to defend the U.S. homeland against rogue nations such as North Korea.

Conceding to limits on missile defense would increase U.S. vulnerability to North Korea’s advancing nuclear arsenal and Iran’s potential one, but would not influence the nuclear calculus of either Russia or China.

And the threat from North Korea remains high. Air Force Gen. Glen VanHerck, commander of U.S. Northern Command, explained: “North Korea’s recent unveiling of a new ICBM capable of threatening North America and Hawaii is meant to constrain options in a crisis. I remained concerned about my ability in the near future to defend the homeland.”

A current U.S. system, called the Ground-Based Midcourse Defense, or GMD, consists of 44 Ground-Based Interceptors. That is far too few to affect Russia’s arsenal of at least 1,550 nuclear warheads deployed on hundreds of ground-, sea-, and air-based platforms.

In fact, Russian leaders attest as much. In 2017, Russian Deputy Prime Minister Dmitry Rogozin stated: “We can rip their air defenses apart; at the moment [the U.S. defense shield] poses no serious military threat to us, except for provocation.”

The planned improvement in U.S. homeland missile defense—the Next Generation Interceptor—won’t change this equation. The system will have advanced capabilities to address the North Korean threat, but with plans to increase interceptor capacity from 44 to 64, the numbers will remain puny compared to Russia’s vast arsenal.

In the same letter to Biden, the 65 critics also point to a November 2020 test using a Navy SM-3 Block IIA missile to shoot down a target representing an intercontinental ballistic missile.

The critics claim that pursuing the use of the SM-3 interceptor against long-range missiles further threatens the confidence that Russia and China have in their strategic deterrence postures. As a result, they theorize that Russia and China will feel compelled to develop new nuclear weapons systems to counter U.S. missile defenses.

But that ignores facts. The SM-3 interceptor is intended to provide a modest boost in U.S. homeland defense capabilities against North Korea during a crisis. As the North Korean threat evolves, this interceptor can be employed for additional protection of the United States, but it by no means approaches any sort of comprehensive defense.

Robert Soofer, deputy assistant defense secretary for nuclear and missile defense policy during the Trump administration, testified June 9 to the Senate Armed Services Committee that “the SM-3 would not be capable against the more complex Russian and Chinese ballistic missiles armed with penetration aids and decoys—nor would it defend against air- and sea-launched cruise missiles.”

Given these simple facts, Biden should pay no mind either to Russian demands for missile defense concessions or to pundits who would argue that the U.S. recklessly trade away missile defense capabilities.

It should surprise no one that Russia has a long history of employing propaganda and disinformation tactics to extract concessions and sow dissension between the United States and its allies.

If a “cause and effect” relationship existed between U.S. missile defenses and Russian nuclear arms, then limiting our missile defenses should stop the Russian buildup. But history tells us otherwise.

After signing the Anti-Ballistic Missile Treaty in 1972, the United States dismantled its Safeguard missile defense system. In the decade following, the Soviet Union pursued one of its largest force buildups in history and added 10,000 nuclear warheads to its arsenal.

Given Russia’s aggression around the world and toward the United States, expecting Russia to behave otherwise if America makes concessions on missile defenses would be naïve.

The United States must remain firm and not make concessions to Russia that threaten the U.S. ability to defend against North Korea and Iran.