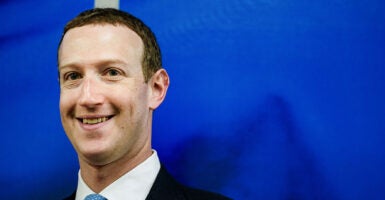 The Center for Tech and Civic Life provided millions in private funding for the elections that came from a $350 million donation from Facebook founder and CEO Mark Zuckerberg and his wife Priscilla Chan. Pictured: Zuckerberg arrives Feb. 17, 2020, for a meeting with the European Commission vice president in charge of values and transparency in Brussels. (Photo: Kenzo Tribouillard/AFP/Getty Images)

In the months leading up to November’s election, voting officials in major cities and counties worked with a progressive group funded by Facebook founder Mark Zuckerberg and its allies to create ballots, strategically target voters, and develop “cure” letters in situations where mail-in ballots were in danger of being tossed out.

In exchange for the money, elections divisions agreed to conduct their elections according to conditions set out by the Center for Tech and Civic Life, which is led by former members of the New Organizing Institute, a training center for progressive groups and Democratic campaigns.

Still other groups with a progressive leaning, including the Main Street Alliance, The Elections Group, and the National Vote at Home Institute, provided support for some elections offices.

Facebook, with the Center for Tech and Civic Life, was also part of the effort, providing a guide and webinar for election officials on how to engage voters. Included were directions to report “voter interference” to Facebook authorities. The company also provided designated employees in six regions of the U.S. to handle questions.

Together, the groups strategically targeted voters and waged a voter assistance campaign aimed at low-income and minority residents who typically shun election participation, helping Democratic candidates win key spots all over the U.S.

The little-explored roles of the Center for Tech and Civic Life and other such groups emerged in emails and other records obtained by RealClearInvestigations and public documents secured by conservative litigants and groups, including the Foundation for Government Accountability, which has filed more than 800 public records requests with elections offices accepting the grants.

Previously, the Zuckerberg-funded effort has been described in generally positive terms, notably when National Public Radio reported in December on “How Private Money From Facebook’s CEO Saved The 2020 Election”—in the face of the coronavirus pandemic—President Donald Trump’s doubts about the legitimacy of the process, and “Congress’ neglect.”

Conservatives take a more critical view of the effort. “This private funding has never been done before,” said Hayden Dublois, a researcher at the Foundation for Government Accountability. “We hear about dark money and corporations buying ads, but never have we seen hundreds of millions of private dollars going into the conducting of elections. And states didn’t have any laws on the books to stop it.”

Numerous Trump supporters contend that the 2020 presidential election was rigged or even stolen but have produced little concrete evidence to prove it. But their suspicions aren’t likely to be dispelled by the efforts of the private progressive groups, however legal. They are among other notable instances of monied interests underwriting public governance and affairs for political ends.

In 2018, RealClearInvestigations reported that a New York University School of Law program funded by billionaire Michael Bloomberg had placed environmentally minded lawyers in the offices of Democratic state attorneys general to challenge Trump administration policies. And examples of private efforts to steer cash-strapped public education are numerous, from the Koch charities on the right to more recent race-conscious programs on the left emphasizing the legacy and centrality of white racism in society.

Zuckerberg did not respond to an emailed request from RealClearInvestigations for comment. In a post-election interview, he praised Facebook’s security work during the election and singled out its policing of “misinformation.” He noted working with polling officials to watch for information that might lead to “voter suppression” and said Facebook had strengthened its enforcement “against militias and conspiracy networks like Q-Anon.”

Facebook has banned Trump from its platform and has delisted individuals—many of them conservatives—for espousing views about the election that it insists are “misinformation.”

According to court documents filed by the Thomas More Society, a conservative law firm, the Zuckerberg-funded Center for Tech and Civic Life allowed elections departments to use grant money to buy vehicles to transport “voter navigators.” The group filed unsuccessful lawsuits in several states before the election, contending the private funding created unconstitutional public-private partnerships. Several other suits remain active.

The election department in Green Bay, Wisconsin, promised as part of its Center for Tech and Civic Life grant of $1 million that it would employ the vote navigators to “assist voters, potentially at their front doors, to answer questions … and witnessing absentee ballot signatures,” according to documents filed in legal complaints in Wisconsin by Erick Kaardal, a Minneapolis-based lawyer who has worked on the Thomas More Society lawsuits.

Caleb Jeffreys, one of at least two voter navigators in Green Bay, described his duties as including “curing absentee ballots.” Jeffreys, now a city employee in Green Bay, according to his LinkedIn profile, did not respond to an interview request.

Agents from the Center for Tech and Civic Life trained poll workers in Georgia and paid for other individuals to count and tabulate ballots in Wisconsin, which was won by Trump in 2016 and President Joe Biden won in November by 20,000 votes.

Emails show that Michael Spitzer-Rubenstein, a fellow with the National Vote at Home Institute, directed Green Bay city employees in gathering and counting absentee ballots on Election Day, and that he was granted access by the city to secured areas and served as an on-site contact for the department on election night.

Rubenstein, who did not respond to a call seeking an interview, also provided help in “curing” ballots that were turned in without the appropriate information, including a signature or address.

Dozens of states require voting clerks to inform voters if their ballot has been filled out incorrectly, giving the voter a chance to fix the ballot and have it accepted. In Wisconsin, that practice is encouraged but not mandatory, under the reasoning that it can drain manpower from other tasks.

But with the grant money provided by the Center for Tech and Civic Life, additional manpower made the time-consuming task feasible, freeing up money for more voter recruitment and outreach.

In Georgia, the grants were used to expand curbside voting and conduct “the necessary voter outreach … to promote absentee voting and encourage higher percentages of our electors to vote absentee,” according to a grant application.

Despite the influx of public money, elections departments across the U.S. were hamstrung because of the pandemic, said Ben Hovland, a Trump appointee to the U.S. Election Assistance Commission, which administers grants to the states.

Hovland praised the Center for Tech and Civic Life for providing the money to run elections.

“This was a very unique set of circumstances, and what you heard from election officials was that this [private] money was going for the basics of trying to help people vote, keeping people safe, postage—really the basics,” Hovland said.

He was unaware of the spending on rap videos, trucks, lawyers, vote navigators, and phone bills with the private money.

“That runs contradictory to what I’ve heard from most election officials,” he said. “But every jurisdiction runs their election different, and each has its own way to spend money, so I can’t speak to any of that. It wasn’t federal funds. It wasn’t taxpayer money.”

As to the need for the money, not all jurisdictions that received a Center for Tech and Civic Life grant used it. The elections office in Miami-Dade County, Florida, received $2.4 million from the Center for Tech and Civic Life, but did not spend it immediately, instead receiving a six-month extension to use the money. Several other municipalities did not spend the entirety of their grants and have received extensions.

Vote margins in many of the areas receiving Center for Tech and Civic Life funding showed increased Democratic voter turnout, part of a strategy to boost the margins enough in Democrat-friendly areas to overcome Republican margins.

Trump took the reliably Republican state of Missouri in 2020, but Biden increased the Democratic presidential vote and won Boone County by 7,000 votes. Hillary Clinton had a 5,000-vote margin in 2016.

In Webb County, Texas, which received $2.8 million from CTCL, voter registrations increased by 10,000 over 2016. The new recruits in the South Texas county voted for Biden by a 2 to 1 margin.

In Fairfax County, Virginia, which received $1.4 million in Center for Tech and Civic Life funding, Democrats increased voter turnout by 65,458 compared with a 10,564 increase by Republicans in 2020 versus 2016. The state, which trends Democratic, went to Biden.

While seven states have passed legislation this year prohibiting or limiting elections departments from accepting private funding, far more allow it and “it will certainly continue,” said Kaardal, the Minneapolis-based lawyer.

Kaardal contends the plan by these operatives, working in league with some election officials, was to increase the absentee ballot turnout among demographic groups that favored their candidates and to offset the margins by Republicans, typically in areas outside cities.

“It was a pay-to-play scheme, where in exchange for taking this money, the Center for Tech and Civic Life gets to tell them how to run the election,” he said. “And it will happen again in 2022.”

In Texas, U.S. District Judge Amos Mazzant III, appointed by President Barack Obama, ruled in favor of the private funding with a stance that was typical among the judiciary in various federal districts and states.

“Ultimately, plaintiffs complain that people with different political views will lawfully exercise their fundamental right to vote,” Mazzant ruled. “That is not a harm. That is democracy.”

It’s a democracy embraced by elections officials across the U.S. who called the 2020 elections the most secure ever.

“If anything like this came along in the future, I would certainly apply,” Adams said. He’s convinced the [Center for Tech and Civic Life] is a nonpartisan group trying to make voting safe and easy, and can’t understand why some states are trying to halt private money in public elections.

“I don’t think it’s the grants these people are mad about,” Adams said. “It’s more a matter of where they came from.”