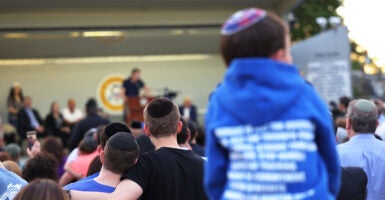 People gather May 27 to listen to Joseph Borgen, a recent victim of an antisemitic hate crime, speak during a rally in Cedarhurst, New York, denouncing the growing violence against Jews in New York and across the U.S. (Photo: Michael M. Santiago/Getty Images)

As 3,000 rockets rained down on Israel, the world’s oldest hatred—antisemitism—reared its head in places once thought unimaginable. Mobs searched for Jews to attack in New York, Los Angeles, and Salt Lake City. Neighborhoods were terrorized, diners assaulted, and Americans wearing yarmulkes bloodied.

These are truly attacks on all of us. America’s foundation and identity as a defender of equality and freedoms are uniquely tied to the history of the Jewish people and the nation of Israel. The same “woke” voices that decry the resilience of the Jewish people also have the United States in their sights.

America’s Founders bestowed upon their towns names like Hebron, Bethesda, Bethlehem, and New Canaan, reflecting a deep respect for the Jewish people, faith, and their “Promised Land.”

In his 1790 letter to the Touro Synagogue, George Washington signaled a new dawn for Western civilization—that those whose survival and perseverance laid the intellectual and spiritual foundation for Western religion, literature, and art, the Renaissance, and the Enlightenment were welcome in a new land.

It is now no more that toleration is spoken of as if it were the indulgence of one class of people that another enjoyed the exercise of their inherent natural rights … the United States gives to bigotry no sanction, to persecution no assistance … May the children of the stock of Abraham who dwell in this land continue to merit and enjoy the goodwill of the other inhabitants—while every one shall sit in safety under his own vine and fig tree and there shall be none to make him afraid.

Washington was not preaching mere tolerance; he was calling for revolutionary acceptance. The late Charles Krauthammer argued that Washington saw America as the new Jerusalem, where peoples of the world could converge in peace, worship in freedom, and enjoy the greatest of unchartered rights—the right to be left alone.

This link between us and the Jewish people became a constant. Harry Truman took up Washington’s charge that the United States was built upon the foundations of freedom erected by the Jewish people, saying:

Sadly, we have come a long way since Washington and Truman spoke these words, and William Bradford stepped off the Mayflower quoting the words of Jeremiah: “Come let us declare in Zion the word of God.”

Today, a portion of the left in the U.S. has embraced identity politics and succeeded in exerting influence in college campuses, public schools, the leadership of our armed forces, and the mainstream media.

A nation that is a beacon of hope, that countless fight and die to get to, is being attacked by a fixation with race that reduces all Americans to the category to which they have been assigned. Jews are the latest victims of this intersectional madness, as segments within our nation warp the facts to fit their narrative.

Matthew Continetti argues that “the squad,” the group of four U.S. House representatives considered to represent some of the most left-wing segments of the Democratic Party—Alexandria Ocasio-Cortez of New York, Ilhan Omar of Minnesota, Ayanna Pressley of Massachusetts, and Rashida Tlaib of Michigan—represents an “ … all-encompassing woke mindset that collapses individuals and events into a reductive binary of oppressor and oppressed. When the Squad looks at Israel and Hamas, it cannot see anything other than Critical Race Theory.”

Some leaders of Black Lives Matter, whose platforms are rooted in Marxist ideology, support the boycott, divestment, and sanctions movement that seeks to delegitimize and ultimately destroy the Jewish state of Israel. The media often ignore the oldest hatred while editorialists preach a moral relativism between Hamas terrorists seeking to murder Jews and the Israel Defense Forces seeking to protect these innocent lives.

Since the reestablishment of the Jewish state in 1948, one force after another, from Nasserite Arabs to Persia’s theocratic fanatics, have tried to push Israel into the sea. The late chief rabbi of the United Kingdom, Lord Jonathan Sacks, had it right: “The Jewish people in its very being constitutes a living protest against a world of hatred, violence, and war.” But the drive to genocide has never been about Israel alone—it is about the Jews on every continent.

The ancient hatred now simmers under the veneer of European culture. Jews in Europe are fleeing violence in places once thought safe, like France and Italy, to the safety of the Israeli lifeboat. The exodus would have happened in the United Kingdom had the squad’s Labour hero, Jeremy Corbyn, been given the keys to 10 Downing Street.

Israel has now replaced the United States as the home of the largest Jewish community on earth because the Jewish state is not afraid to fight back. As antisemitism raises its ugly head in the U.S., some Americans are also fighting back, but more should join them.

Although it is still hyperbolic to think that America will travel the same road as Europe, northern Africa, and the Middle East, the signs are not encouraging. The tepid response of the liberal clerisy in the wake of antisemitic violence rampaging through the once safe streets of the United States is deafening. George Washington would be ashamed.