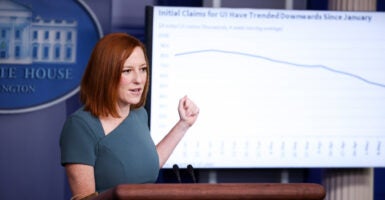 Now 15 months after Congress first responded to the COVID-19 pandemic, it’s evident that unprecedented federal unemployment insurance bonus benefits are hurting the recovery, making it harder for businesses to find the workers they need to recover, and harder for consumers to find the products and services they want at prices they can afford.

Moreover, prolonged unemployment benefits contribute to a smaller economy, higher deficits, and most importantly, poorer outcomes for the long-term unemployed.

President Joe Biden claimed that generous unemployment compensation has not had a “measurable” effect on the poor jobs recovery and worker shortages.

>>> WATCH: Paying Americans not to work hurts society’s most vulnerable people. Hear from Patrick Driscoll, a severely disabled man in need of care, who was left without caregivers in the wake of poorly planned stimulus spending. Watch the mini-documentary here.

Here are nine indications that it’s time for the federal government to get out of the way of the recovery:

4) Record-high “quits”: As 4 million workers quit their jobs in April (2.7% of all employees), the number and rate of “quits” also hit record highs. The more options that workers have available to them—including the ease with which they can find another job and the availability and generosity of unemployment insurance benefits—the more likely they are to quit. Policymakers in favor of ongoing unemployment bonuses argue that some workers are quitting their jobs out of fear of catching COVID-19. But rising quits alongside widely available and increasing vaccinations doesn’t make sense.

5) Record-low layoffs: The final record-setting statistic for April was a record-low number (1.444 million) and rate (1%) of layoffs and firings. Employers report a strong hesitancy to lay workers off, even if they violate workplace rules or refuse to perform certain jobs, because it’s so hard to find replacements.

7) Companies are competing for workers: The president might not consider it “measurable,” but across the country, Americans have seen the “We’re hiring” signs or the “We’re sorry for the wait; we’re short-staffed” apologies. And then there are all the pay and benefits increases. Cedar Point Amusement Park in Sandusky, Ohio, for example, doubled its starting wages to $20 per hour and still will only have enough workers to open on a limited schedule. Amazon is offering $1,000 signing bonuses, even to those with no experience, and companies such as Chipotle and Taco Bell are providing college tuition assistance and paid family leave benefits—all in an effort to attract workers. These added pay and benefits are nice for the workers who receive them, but they also translate into higher prices for consumers, and ultimately less purchasing power even for the employees who receive higher wages.

9) Child care struggles are not hurting parents’ employment: Initially, child care and school closures associated with the COVID-19 pandemic disproportionately affected parents’—particularly mothers’—employment. But it’s no longer the case that women have been disproportionately affected, and a study by former President Barack Obama’s former chairman of his Council of Economic Advisers found that employment among parents of young children has declined by less than workers without young children and that child care issues that have pushed young women out of the workforce account for “zero” of the pandemic-related reduction in employment.

It’s time for the federal government to stop stimulating demand and restricting supply by pumping more deficit-financed spending into the economy and by proposing trillions of dollars in new government programs.

And instead of bankrupting young workers and children by taking out ever-increasing debt in their names, policymakers should commit to a fiscally responsible post-pandemic budget that will help prevent a financial crisis by putting America on track toward fiscal sustainability.