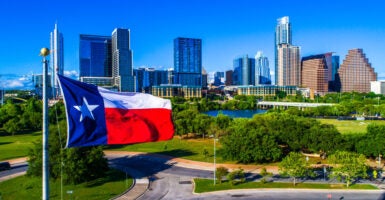 Republicans’ recent mayoral victories in Texas came as major Democratic groups warned that the party is at risk of losing the support of voters of color. Pictured: The Texas flag waves against the Austin skyline. (Photo: RoschetzkyIstockPhoto/Getty Images)

In Forth Worth, a city of just over 1 million, 37-year-old Republican Mattie Parker cruised to victory against Democrat Deborah Peoples, making her the youngest mayor in the city’s history, the Fort Worth Star-Telegram reported. In McAllen, a border town of approximately 150,000 where 85% of residents are Hispanic, Republican Javier Villalobos became the first GOP mayor elected since 1997, Valley Central News reported.

Republicans were also victorious in Arlington, a suburb of 400,000 just outside Forth Worth. GOP candidate Jim Ross, a former police officer in the city, beat the Democratic candidate after campaigning on an anti-crime platform and earning endorsements from several police groups, according to the Star-Telegram.

In May, Republicans also triumphed in the special election in Texas’ 6th Congressional District, with two GOP candidates advancing to a runoff to succeed the late Rep. Ron Wright and boxing Democrats out of the race completely, the Texas Tribune reported.

“Democrats have a big problem in Texas,” Rep. Filemon Vela, D-Texas, who represents the region, told the Texas Tribune in January. “For the first time in generations, or maybe ever, we lost … South Texas counties with significant Hispanic populations.”

Vela was appointed as the vice chairman of the Democratic National Committee just days earlier as part of the party’s effort to reverse its slide among Hispanic voters. Former President Donald Trump won nearly a third of Latino voters nationwide, up more than four points from 2016, according to exit polls.

Republicans’ victories in Texas came as major Democratic groups released an extensive report warning that the party is at risk of losing the support of voters of color.

“The party is at risk of losing ground with Black, Hispanic and Asian American voters unless it does a better job presenting an economic agenda and countering Republican efforts to spread misinformation and tie all Democratic candidates to the far left,” the report said, acknowledging that Republican criticism of the left’s stance on crime and police was effective. “The opposition latched on to G.O.P. talking points, suggesting our candidates would ‘burn down your house and take away the police.’”