Facebook Extends Its Ban of Trump to 2 Years or More 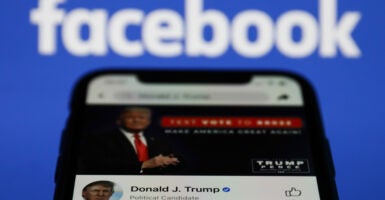 “They shouldn’t be allowed to get away with this censoring and silencing, and ultimately, we will win," former President Donald Trump says of the extended ban by Facebook. Pictured: Trump's now-suspended Facebook account is displayed on a smartphone screen. (Photo: Jakub Porzycki/ NurPhoto/Getty Images)

Facebook announced Friday it has extended its ban of former President Donald Trump for 19 more months—for a total of two years—and may ban him permanently at a future date.

“Given the gravity of the circumstances that led to Mr. Trump’s suspension, we believe his actions constituted a severe violation of our rules, which merit the highest penalty available under the new enforcement protocols,” Nick Clegg, vice president of global affairs for Facebook, said in a written statement.

“We are suspending his accounts for two years, effective from the date of the initial suspension on January 7 this year,” Clegg said.

The two-year ban might not be the final word on the matter, depending on whether “experts” consider Trump’s words to be a “risk to public safety,” the Facebook executive said.

“Facebook’s ruling is an insult to the record-setting 75M people, plus many others, who voted for us in the 2020 Rigged Presidential Election,” Trump said in a prepared statement. “They shouldn’t be allowed to get away with this censoring and silencing, and ultimately, we will win. Our Country can’t take this abuse anymore!”

Kara Frederick, a research fellow in technology policy at The Heritage Foundation, the parent organization of The Daily Signal, called Facebook’s decision “inconsistent” and “vague.”

“Social media companies should democratize ideas and information, not stifle them,” Frederick said in an email to The Daily Signal, adding:

Further, if these companies continue to actively insert themselves between the user and content, they should target legitimate purveyors of violence like the antisemitic ayatollah of Iran, who remains active on Instagram.

Today’s decision is unhealthy for a free society and the body politic writ large.

The Biden administration also weighed in, with White House press secretary Jen Psaki saying it’s a decision for a private company to make.

As we look at it, we learned a lot from President Trump, the former president, over the last couple of years about his behavior and about how he used these platforms.

It feels pretty unlikely that the zebra is going to change his stripes over the next two years.

Facebook originally suspended Trump after the Capitol riot Jan. 6, in which a mob broke into the building as a joint session of Congress formally counted the Electoral College votes that made Democratic challenger Joe Biden the victor over Trump, a Republican.

In May, the ban was upheld by Facebook’s Oversight Board, which serves as an appeals committee of sorts made up of members from outside the company. However, the board determined that “it was not appropriate for Facebook to impose the indeterminate and standardless penalty of indefinite suspension.”

The Oversight Board called on Facebook to draw up clearer guidelines within six months.

“At the end of this period, we will look to experts to assess whether the risk to public safety has receded,” Facebook’s Clegg said Friday, adding:

We will evaluate external factors, including instances of violence, restrictions on peaceful assembly, and other markers of civil unrest.

If we determine that there is still a serious risk to public safety, we will extend the restriction for a set period of time and continue to reevaluate until that risk has receded.

When the suspension is eventually lifted, there will be a strict set of rapidly escalating sanctions that will be triggered if Mr. Trump commits further violations in the future, up to and including permanent removal of his pages and accounts.

Rep. Ken Buck, R-Colo., noted that the platform continues to allow the Chinese Communist Party and Syrian dictator Bashar Assad, among others, to post messages.

“Facebook is suspending former President Trump for two years, but continuing to allow [Chinese Communist Party] propaganda, Assad, and human smugglers to use their platform. That is utter hypocrisy, and Facebook must be held accountable,” Buck said in a written statement.

“Facebook can only censor conservatives because of their monopoly power,” the Colorado Republican said. “Conservatives need to address Facebook’s anticompetitive behavior, or they will never stop censoring.”