‘We Have the Support of the President.’ For These Americans, Human Trafficking at the Border Is a Form of Political Activism. 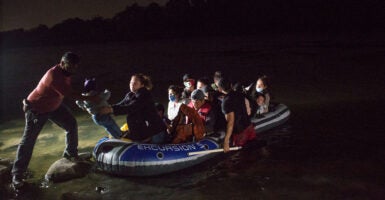 An increasing number of U.S. citizens are receiving illegal immigrants into the U.S. from Mexican cartels as a form of "political activism." They are being well compensated for it. Pictured: Central Americans cross the Rio Grande River from Mexico into the United States on April 15. (Photo: Andrew Lichtenstein/Corbis/Getty Images)

An increasing number of U.S. citizens—who consider themselves “political activists”—are taking money from Mexican cartels to receive illegal immigrants into the U.S. from the Mexican border and smuggle them into the interior of the United States. They do so believing that President Joe Biden condones their actions, thanks to his administration’s rhetoric and policies on immigration.

“Since the influx of [illegal immigrants] started to pick up … the smugglers driving vehicles [on the U.S. side] are now predominantly U.S. citizens and basically work for the cartels. They are getting very reimbursed for their efforts,” an Arizona rancher, who wished to remain anonymous, told me in an interview.

“The [Santa Cruz County sheriff] said when they are apprehended, the smugglers tell him, ‘We have the support of the president.’”

The rancher who spoke to me has decades of experience ranching on the border and extensive contacts with all levels of law enforcement, as well as deep ties in his own town on the Arizona-Mexico border. He requested anonymity to protect local and federal law enforcement officers with whom he has collaborative relationships. “This [information] also came to me from Border Patrol agents I work with; it was corroborated by them,” he added.

Arizona border resident John Guerrero told me in an interview that this was a “new trend,” which began shortly after Biden took office.

He said, “A lot of [human smugglers] we’re seeing now are not of Hispanic origin. We saw a middle-aged male, Caucasian … on Easter evening [at a smuggling transition point in the Huachuca Mountains]. He was looking really lost … he did everything he could to evade any contact with me and left. Then I saw his headlights bouncing around the dirt roads as if he were looking for a group, but he didn’t know the area.”

A retired Army Ranger, Guerrero was also an intelligence analyst on border security as a former volunteer with the Southeastern Arizona Border Region Enforcement Team of the Cochise County Sheriff’s Office.

“That’s what we’re seeing now [since Biden took office], and it correlates with what the sheriff in Santa Cruz county said about how Americans are picking up the roll as political activists. [They] come down here to be a part of the smuggling operation.”

U.S. citizens entering the human trafficking business as political activists see their actions as an opportunity to advance the Biden agenda. As Guerrero explained:

Arizona is typically very conservative, especially in this county—cattle country. If people [with contradictory political views] can come down here and make more money by smuggling and express their political views by assisting and getting people across, [they consider it] a win-win for them.

But this dangerous form of “political activism,” inspired by the Biden administration, is at best rooted in ignorance. Illegal immigrants have no choice but to collaborate with Mexican “coyotes”—a term for smugglers on the Mexican side—and other individuals employed by the cartels in order to cross into the United States.

And, as the anonymous Arizona border rancher expressed to me, the cartels have a complete “disregard for human life.”

He explained, “We have found over the years that the majority of cartel members involved in smuggling have treated the immigrants very, very badly.” He offered one illustration, saying, “We’ve had examples of ‘rollovers’ (vehicles overloaded with [illegal immigrants] flipping over) where we’ve seen people dismembered and some immediately killed.”

In these instances, when the smugglers or coyotes coming from the Mexican side are apprehended by Border Patrol, they are more concerned about their own comfort than the illegal immigrants they brought into the U.S.

“They couldn’t care less about the dead people or the people that are hurt,” the rancher added angrily. “They show more concern about the tightness of their own handcuffs or the temperature of the Border Patrol truck.”

When asked about his experience with the new trend of human smuggling for political activism, the rancher’s voice raised:

There is a tremendous amount of hypocrisy involved in this whole deal … [These smugglers] are justifying [human trafficking] by saying that the message they are getting from the current administration makes [their actions] perfectly good. Then, they are lining their pockets with cash.

“This is an inhumane approach [to border security],” he continued with exasperation. “One which doesn’t seem to be emphasized [by the government or media] … Dead people have been found in this area. When you see all these kids being dumped, that really have no idea what the hell is going on, it’s frightening!”

There is little to no legal risk for U.S. citizens engaging in human trafficking at the southwestern border since, under the Biden administration, smugglers apprehended by law enforcement are routinely released from jail into border communities. These smugglers bear few consequences, are well-paid, and “earn” a false sense of patriotism and loyalty to the Biden administration.

As Guerrero said, it is a “win-win situation” for these U.S. citizens/human traffickers. But for illegal immigrants, encouraged by U.S. border policies to trust the cartels with their life savings and their very lives, it won’t always turn out so well.