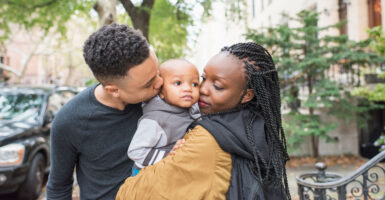 The persistence of problems in black communities stems from federal policies that pretend to fight the sin of racism with the sins of the destruction of life and family. (Photo: Tony Anderson/Getty Images)

If there is one reason why problems associated with race in America persist, it is because we pretend to address problems caused by one sin by exchanging them with other sins.

President Joe Biden has just issued a proclamation recognizing 100 years since the race massacre that occurred in the Greenwood District in Tulsa, Oklahoma, in 1921.

Greenwood was a wealthy black neighborhood, a center of black business, known as Black Wall Street, that was ravaged in two days of rioting by white racists. It resulted in the death of hundreds and the loss of property of thousands.

It is indeed another tragic and painful memory of race relations in our nation’s history.

The proclamation issued by Biden states, “The federal government must reckon with and acknowledge the role that it has played in stripping wealth and opportunity from black communities.”

I totally agree. What offends me is that Biden’s administration enthusiastically continues federal policies that damage black communities, while it pretends it is addressing the problems.

As a starter, let us consider that at the same time the president issued this proclamation, he sent an unprecedented $6 trillion federal budget to Congress that, for the first time ever, omits the longstanding Hyde Amendment.

The Hyde Amendment, passed in 1976 and named for its sponsor, Illinois Rep. Henry Hyde, prohibits use of federal funds to pay for abortion, except in cases of rape or incest or when the mother’s life is in danger.

Every federal budget since the Hyde Amendment was passed has included a rider with this provision—except this year’s, thanks to Biden and his party.

So, while Biden issued one proclamation recalling the tragedy of a massacre of black Americans, he now wants new federal policy that would use federal funds to subsidize another massacre.

Abortion policy in our nation amounts to nothing short of a massacre of and tragedy for black Americans, born and unborn.

According to National Right to Life, 62.5 million unborn children have been destroyed in the womb since Roe v. Wade legalized abortion on demand in 1973.

Per the most recent data from the Centers for Disease Control and Prevention, about one-third of all abortions are done on black babies. Given this, we can estimate that since 1973, some 21 million black babies have been destroyed in the womb.

But the damage done by abortion to black Americans goes beyond this massacre of unborn black children. It has tangible, damaging effects on the well-being of the black family.

Why, after all these years, do poverty rates persist so much higher, on average, in black communities compared with national averages?

Data shows a compelling correlation between family structure and incidence of poverty.

The persistence of problems in black communities stems from federal policies that pretend to fight the sin of racism with the sins of the destruction of life and family.

Now Biden not only wants to continue this destruction; he wants to use our tax dollars to subsidize it.