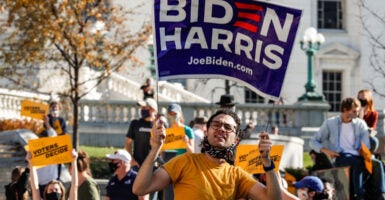 “The lack of oversight of these [outside] groups should concern everyone in the state of Wisconsin as we work toward transparent elections," state Rep. Janel Brandtjen says. Pictured: Biden supporters rally Nov. 7 in Madison, Wisconsin. (Photo: Joel Lerner/Xinhua /Getty Images)

Saying they are concerned about liberal groups entrenched in administration of Wisconsin elections, a crowd of about nearly 140 turned out for a “Standing Up for Voter Integrity” rally at the State Capitol.

The sponsor of the rally, the Wisconsin Voter Alliance, has led legal challenges to the third-party groups accused of infiltrating the elections in Madison and the Badger State’s four other largest, most heavily Democrat cities.

“As I talk to citizens around Wisconsin, there still are a lot of questions about CTCL [the Center for Tech and Civic Life] and their involvement in the 2020 election,” state Rep. Janel Brandtjen, R-Menomonee Falls, said. “The lack of oversight of these [outside] groups should concern everyone in the state of Wisconsin as we work toward transparent elections.”

“CTCL and the other 12 nonprofits in Wisconsin cast a shadow of doubt over voting integrity for all elections moving forward,” Brandtjen said.

Few red flags appear more concerning to her and other observers than the Chicago-based Center for Tech and Civic Life’s network of liberal voting activists, who, according to emails obtained by Wisconsin Spotlight, became deeply involved in administering the November election in Milwaukee, Madison, Green Bay, Kenosha, and Racine.

In final official results in Wisconsin, Biden defeated Trump by 49.6% of the vote to 48.9%, flipping a state with 10 electoral votes that Trump won in 2016.

As the new complaint filed Monday against Madison lays out, the Center for Tech and Civic Life showered the WI-5 cities with more than $8 million in grant funding, with Madison receiving more than $1.27 million of the cut. The complaint, filed Tuesday, names Madison Mayor Satya Rhodes-Conway, a Democrat, and City Clerk Maribeth Witzel-Behl.

In total, CTCL received $400 million from Facebook founder and CEO Mark Zuckerberg and his wife, ostensibly to promote “safe and secure” elections during the COVID-19 pandemic. At the same time, critics say, Zuckerberg’s mammoth social network was silencing many conservatives and conservative viewpoints.

The Center for Tech and Civic Life’s partners literally got the keys to absentee ballots as one long-time Democratic operative offered to “cure” ballots. The complaints allege CTCL, its partners, and city officials usurped authority solely granted to local and state elections officials under state law and the U.S. Constitution.

Mary Baldwin, one of five Madison citizens who made the latest complaint, said it’s time for Wisconsin voters to stand up and be counted.

A grandmother of five, Baldwin said she has seen a lot in her life, but what she saw at the polls in November was deeply concerning.

“I want my country to be OK for my children and grandchildren,” Baldwin said. “I don’t think it was a fair election. Five states were targeted. Wisconsin was one of them.”

Although the Center for Tech and Civic Life and its defenders argue that the left-leaning group handed out election administration grants to communities across the country, that funding was skewed heavily to liberal strongholds, particularly in battleground states such as Wisconsin.

Ron Heuer, president of the Wisconsin Voter Alliance, said he is relieved to have complaints filed against all five Wisconsin cities. But the fight is far from over, Heuer said.

Wisconsin Elections Commission spokesman Reid Magney said the commission had not received the complaint as of Tuesday afternoon, but would have no comment.

As with the other complaints, the allegations in Madison will be reviewed by outside counsel, which has asked the cities and state Election Administrator Meagan Wolfe to respond by June 15. Wolfe is named as a respondent in the complaint.

Emails show that Wolfe attempted to connect election officials in four Wisconsin cities with one of CTCL’s partners. Wolfe, the complaint alleges, publicly signaled her approval of the funding plan in defiance of state law.

A spokeswoman for Rhodes-Conway, Madison’s mayor, did not respond to a request for comment. The city clerk’s office directed all questions to Madison City Attorney Mike Haas.

“If the WEC requires a response we will submit a response,” Haas said in a curt email.

Baldwin, who refers to herself as “the right Baldwin” in a city that’ is home to U.S. Sen. Tammy Baldwin, D-Wis., said she wants to do her part to make sure every legal vote is counted.

“It’s critical that we all vote. We have to take that first step,” she said. “But I want my vote to count for the party I voted for, the individuals I voted for.”

In the end, Wisconsin’s five largest cities saw massive turnout, with Biden substantially benefiting from it.

Biden won Green Bay by about 4,000 votes, but lost surrounding Brown County to Trump, 52.8% to 45.6%. Trump also won Racine County with 51.3%, although Biden picked up more votes in the city of Racine.