I Am a Mother to a Son With Gender Dysphoria. Here Is My Message to Elected Officials. 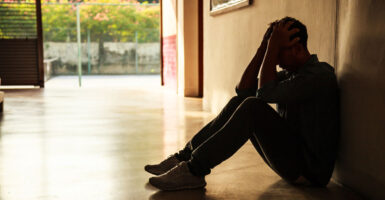 Accompanying gender dysphoria are issues such as autism, which many counselors don’t take the time to understand. But, the gender affirmation-only approach in states like New Jersey only encourages our children and young adults to transition. (Photo: Vichai Phububphapan/Getty Images)

Crystal is a pseudonym for a mother who became an advocate for her son and an advocate against the physical psychological harms being done to children and young adults in the name of “transgender” ideology. She blogs at www.NewJerseyMama.net.

As I watch the news and see more and more states consider laws to ban doctors from using hormones and performing surgeries on children and youth who struggle to feel comfortable with their bodies, I can’t help but think of my son’s struggle.

At age 19, my son announced his identity as a woman, despite never having shown any prior signs of gender dysphoria. Though I did not understand what was going on, I acknowledged his discomfort. Truly, nothing pains a parent more than when your child is hurting.

However, while I was committed to exploring all options to ensure his best long-term health, he insisted on pursuing transition. I started interviewing therapists to learn about care options for children who, like my son, struggle with gender dysphoria.

Time and time again, therapists told me that the only alternative to transition is suicide—despite the fact that chemical or surgical transition procedures have not been shown to alleviate suicidal ideation. In fact, even after surgery, transgender individuals are 19 times more likely to commit suicide that their comparable peers.

Time and time again, I was surprised at their casual attitude toward my son’s long-term health. Despite what the activists say, the effects of puberty blockers and hormones are irreversible. Not only do they lead to sterilization, they can contribute to other health problems, such as the loss of bone density and cardiovascular disease.

Time and time again, I was treated by school faculty, doctors, and activists as “the enemy” for being unwilling to support my son’s sterilization and mutilation. And my son’s school kept me in the dark. While I was interviewing therapists, my son’s college campus doctor prescribed him estradiol, an estrogen hormone used to help biological males appear more like women, without ever notifying me. I found out six months later after the fact.

Countless parents like me, parents who simply desire to protect their children’s health, have been kept in the dark by school faculty and staff and bullied into silence by transgender activists.

Today, 20 states plus the District of Columbia have passed laws that prevent children who are suffering from gender dysphoria from obtaining a fair and balanced medical assessment.

In my home state of New Jersey, when Gov. Chris Christie signed bill A 3371 into law in 2013, he changed our lives forever. My state representatives banned licensed professionals from talking to patients (like my son) about their “gender identity” or “gender expression.” The only speech New Jersey allows is promoting “sex transition” to children and youth.

The procedures involved in “sex transition” are cruel and barbaric. Children are given puberty blockers and cross-sex hormones. Girls and young women are prescribed testosterone and have mastectomies. Boys and young men are prescribed estrogen to grow breasts and have “bottom surgery” on their genitalia.

Transitioning to the opposite sex is biologically impossible. Cross-sex hormones and surgeries may alter a person’s appearance, but they can’t change a person’s sex.

Children and youth struggling with their gender identity should be allowed to discuss “why” they feel uncomfortable in their bodies. Questions such as why they feel their lives would be better after they transition should be asked. There are no long-term studies that show the benefits to transition, or the side effects of hormones. Hormone therapy is not approved by the Food and Drug Administration. Children need options, not hormones and surgeries.

Accompanying gender dysphoria are issues such as autism, which many counselors don’t take the time to understand. But, the gender affirmation-only approach in states like New Jersey only encourages our children and young adults to transition. We would serve our children better by providing them with proper mental evaluations as to why they experience anxiety in their real bodies.