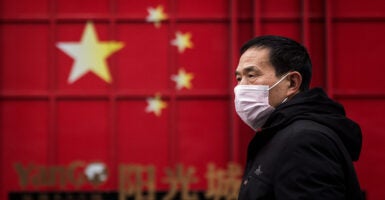 It now seems highly credible that COVID-19 originated inside a Chinese state laboratory—and that China knew about it as early as November 2019. Pictured: A man wears a protective mask Feb. 10, 2020, in Wuhan, China. (Photo: Stringer/Getty Images)

This week, The Wall Street Journal reported that three researchers from the Chinese Wuhan Institute of Virology were hospitalized in November 2019 with “symptoms consistent with both COVID-19 and common seasonal illness.”

That report followed hard on a series of investigative pieces from journalists such as Nicholas Wade and Donald McNeil, formerly of The New York Times, who revived the media-dismissed theory that the institute had generated COVID-19 in a laboratory and then accidentally allowed it to leak.

“The argument that it could have leaked out of the Wuhan Institute of Virology or a sister lab in Wuhan has become considerably stronger,” McNeil wrote. “And China’s lack of candor is disturbing.”

It now seems highly credible that COVID-19 originated inside a Chinese state laboratory—and that China knew about it as early as November.

In mid-January, the World Health Organization reported, based on Chinese information, that “Preliminary investigations conducted by the Chinese authorities have found no clear evidence of human-to-human transmission of the novel #coronavirus.”

China censured its own Dr. Li Wenliang for attempting to spread the news of COVID-19’s danger. It took until the end of January for China to lock down Wuhan.

We’ll never know the answers to those questions because the same WHO that covered for China in the early days of the pandemic is responsible for investigating Chinese malfeasance today. And President Joe Biden’s administration seems happy to keep it that way.

Asked about whether America would lead an independent investigation into COVID-19’s Chinese origins, White House press secretary Jen Psaki stated, “We have repeatedly called for the WHO to support an expert-driven evaluation of the pandemic’s origins that is free from interference and politicization.”

Meanwhile, this week, actor John Cena apologized to the Chinese government. Cena, who stars in the upcoming “F9,” was being interviewed by a Taiwanese television station and committed the grave offense of stating that “Taiwan is the first country that can watch” the movie.

China, of course, sees Taiwan as an outlying territory of China and denies Taiwanese sovereignty. So, Cena, whose film has already grossed over $100 million in China, quickly issued an apology in Mandarin, saying: “I made a mistake. Now I have to say one thing, which is very, very, very important: I love and respect China and the Chinese people.”

The common thread here is a Western unwillingness to face down China’s authoritarian regime. For some on the left, challenging China means standing up for Western values like democracy and human rights—and this, in turn, raises questions about America’s own commitment to those principles. For some in corporate America, capitalism hasn’t opened China but made the West more dependent on mercantilist Beijing.

“We’re in competition with China and other countries to win the 21st century,” Biden said in his recent quasi-State of the Union address. “We’re at a great inflection point in history.”

China’s possible unwitting release of COVID-19 and its fully documented cover-up is a unique opportunity to recalibrate the West’s relationship with China. But there seems to be little taste for that necessary recalibration from a wavering Europe and United States.

Meanwhile, China isn’t wavering. China grows increasingly aggressive: through its Belt and Road Initiative, its militaristic advances in the South China Sea, and its international ties with European countries happy to make concessions.

China doesn’t have to defeat the United States. All it has to do is outlast us. And right now, thanks to an ugly combination of hesitancy, cowardice, and corruption, China seems well-positioned to do so.