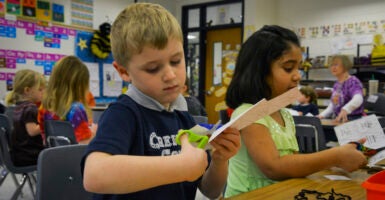 A Virginia school district has become an epicenter of the debates occurring over critical race theory and other, similar curriculums coming to K-12 classrooms around the country.

In 2020, Loudoun County Public Schools adopted a plan to double down on bringing so-called culturally responsive teaching to the classroom.

It’s notable that the administration of Loudoun County Public Schools has not only aggressively promoted critical race theory, it essentially threatened teachers and staff against criticizing the program in any way, on campus or off.

The message it sent to staff was, basically, that the First Amendment is fine and all, but accept the “Diversity, Equity, and Inclusion” plan—or else.

While the school district has been enforcing the revolution, it seems many parents there have awoken to what has been foisted on their children and have been filled with a terrible resolve.

Shawntel Cooper, a black mother, assailed the Loudoun County School Board at a board meeting in remarks that deservedly went viral. She compared the ideology of critical race theory to other hateful and racist ideologies in history.

“Critical race theory is not an honest dialogue. It is a tactic that was used by Hitler and the Ku Klux Klan on slavery very many years ago to dumb down my ancestors so we could not think for ourselves,” Cooper said. “Critical race theory is racist. It is abusive. It discriminates against one’s color. … You cannot tell me what is or is not racist.”

Several parents criticized the district’s Diverse Book Collection, which contained tomes with sexually explicit and otherwise age-inappropriate material. Not only that, a large number of the titles appear to be little more than left-wing propaganda of various kinds.

You can see the entire list of books here, but it’s worth highlighting some examples.

For instance, several parents complained about the books “Monday’s Not Coming” by Tiffany Jackson and “#MurderTrending” by Gretchen McNeil—recommended to high school students as early as ninth grade—that contain extreme violence toward women and sexually explicit passages.

“During the May 11 board meeting, parents read aloud passages from both books with graphic descriptions of oral sex, male genital size, and a scene in which a woman is beaten and locked in a closet,” the Loudoun Times-Mirror reported.

“We’re trying to overcome stereotypes, right? Why, if that is the case, are we giving them books that normalize physical abuse, sexual abuse, rape, murder, by people of the same community [Loudoun County Public Schools is] trying to raise up?” Elizabeth Perrin, a parent, said in an interview with the Times-Mirror.

“The Upside of Unrequited,” a book recommended to eighth graders, contains a passage with a character glorifying being called a “slut.”

This is what one character says: “Here’s what I would never, ever admit out loud: A part of me always thought it was some kind of a secret compliment when someone got called a slut. It meant you were having sex. It meant people wanted to have sex with you. Being a slut just meant you were normal. But I think maybe I’m wrong about that. Maybe I’m so wrong.”

Again, the question is: Is that really appropriate for a middle school student?

According to some Amazon reviews, the book is little more than a series of continual, shallow woke sermons.

Many of the books deal with gender identity.

The book “Ana on the Edge,” recommended to sixth graders, is about a female figure skater who meets a girl who “identifies” as a boy and wants to identify as a boy herself.

Here is a description from the publisher:

Twelve-year-old Ana-Marie Jin, the reigning U.S. juvenile figure-skating champion, is not a frilly dress kind of kid. So, when Ana learns that next season’s program will be princess-themed, doubt forms fast. Still, Ana tries to focus on training and putting together a stellar routine worthy of national success.

Once Ana meets Hayden, a transgender boy new to the rink, thoughts about the princess program and gender identity begin to take center stage. And when Hayden mistakes Ana for a boy, Ana doesn’t correct him and finds comfort in this boyish identity when he’s around.

As their friendship develops, Ana realizes that it’s tricky juggling two different identities on one slippery sheet of ice. And with a major competition approaching, Ana must decide whether telling everyone the truth is worth risking years of hard work and sacrifice.

At the eighth-grade level and above, the number of books about transgenderism, bisexuality, homosexuality, and with racial and gender identity topics explodes.

And given that Loudoun County Public Schools tried to silence any dissent to its woke agenda, it’s unsurprising that the list of recommended books includes a glorification of Marxist Cuba.

“My Brigadista Year,” assigned to fifth graders, is a fictional story about a 13-year-old who heeds Cuban dictator Fidel Castro’s call that “all teachers spread literacy to Cuba.”

The book is a not-too-subtle apologia for the Cuban communist regime. Here’s what the author, Katherine Paterson, said in an interview when asked why she wrote the book:

Well, I know there’s more than one reason, but one reason that occurred to me is that I didn’t know anything really good about Fidel Castro. And when I discovered that Cuba was more literate than the United States because of him, it has a better medical system beforehand because of him, I thought, why is it that we, when we admire someone, we want them to be perfect? And when we just dislike someone, we refuse to see any good in them?

Being woke in modern America means that Thomas Jefferson shall be damned for his sins and cast out, while a ruthless dictator who worked with the Soviet Union to point nuclear missiles at the United States is treated as an admirable, misunderstood man who made some mistakes.

The book list is hardly surprising, given the woke agenda of the school district, but it’s still notable when you consider that these works are not only commonly assigned to public school students, they are increasingly the only messages reaching the ears of many young Americans.

Is it any wonder why the number of children with gender confusion is exploding, while even a basic understanding of, say, civics is in a state of collapse?

Battles over curriculums in American public schools are nothing new, but the scope and depth of promoting radical ideas—such as critical race theory and gender identity theories, until recently mostly relegated to gender and ethnic studies departments on college campuses—is out of control.

And that agenda is not just coming to one county in Virginia, but to school districts around the country.